Temporary placeholder: somehow I didn’t wake up until 4:00 PM today and I had a couple more (and longer) phone calls to make than usual for my non-gamedev job, so I’ll find the time to update this into a real post on Tuesday, but for now just enjoy this pixel art of Ardis! (I’ll also be able to show her animated tomorrow.) 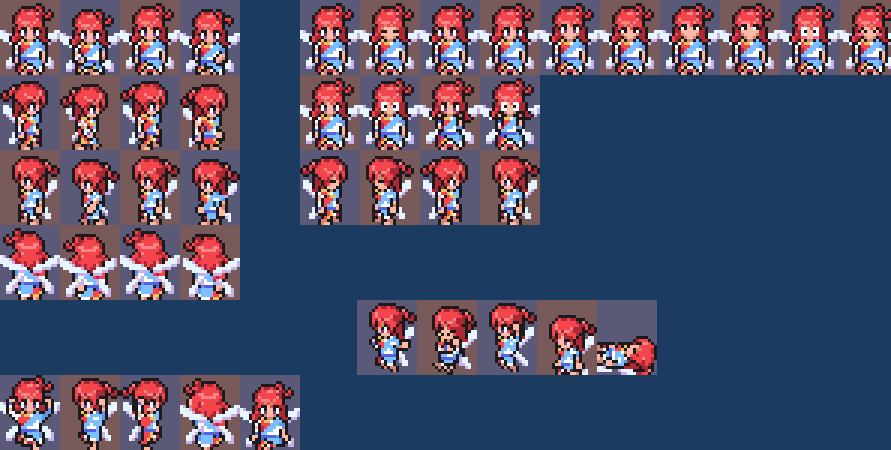 Alrighty, this took… a bit longer than expected. x_x And I don’t even have animations to show just yet! The ones I’ve put up in the past actually take me a good 30 minutes each to play with, so it’s a little difficult to find the time now even though that’s certainly better for presentation purposes. I’ll have her on Monday for sure. What I do have to share are some extra sprites for the tilesets from Becca!

Up to this point I haven’t shared the environmental pixel art because just showing off tilesets makes no sense at all from a presentation standpoint, yet at the same time I don’t want to give full spoilers of dungeon layouts. When the rest of the overworld tiles are completed then I can share something for real, but for now, these are standalone objects that can be used in a variety of locations! More furniture and other objects will be coming in the future, but these were a good starting point, so enjoy. :D

Much like when I was testing the EarthBound-style HP counters a few months back, I haven’t been able to make the multi-turns battle system feel quite as intuitive as I’d like for what I’m aiming to do. It basically degenerates battles into a lot of micromanaging and tracking turn numbers, which is something I occasionally enjoy in games like the Etrian Odyssey series, but doesn’t even slightly fit the lighthearted universe and old-school feel of Dreamblazers. Great system, but in the end I can’t go with it.

After all the previous time spent figuring out what to do with fashion bonuses, I’ve settled on making enemies stronger overall and making fashion bonuses slightly tougher to obtain. Stronger enemies was an easy call, but fashion bonuses not so much. My main issue in the current setup was that just in my imagination alone it seemed really weird to me what kind of results I was getting.

If I could illustrate this with a dress up Flash game right now then I would, but in lieu of that I’ll go with the closest thing. Let’s take Celty…

Right now you could put double nail polish in her two empty accessory slots and a pair of transparent stockings on her legs and she’d immediately earn a Girly Girl bonus. Note that I said transparent stockings, so basically nothing about her design changes in this hypothetical except the color of her nails.

If that’s not a good enough example, I’ll give one more with Hikaru…

Right now you could put a headband on her, put a martial arts belt on her, swap her bracelets out for sweat bands, and swap her boots for sneakers and she’d qualify for a Sporty bonus. Again, this doesn’t feel quite right.

So the bottom line is that I’m tweaking the system to require more fashion points total while also adjusting the number of points that clothes give. Star isn’t a character who I’m testing right now because she won’t be needed for the initial demo or quite a while after it, but taking her left dress as an example for the future…

…her hair pieces could give 2 Girly Girl points, her dress could give 4, her bracelets could give 1, her sash could give 3, and her boots could give 2. Or at least that’s the current idea! Giving different levels of importance to different pieces of clothing makes the distribution feel more believable from an in-universe perspective instead of pure number manipulation.

(Actually, now I’m brainstorming mid-blog-post! most of my characters have fairly mix-and-match fashions by default, but I just realized that Star goes 100% all in on a girly theme. Maybe there’s something to be said for that having its own bonus, racking up points for being ultra dedicated to a theme. 7 points is the current threshold to hit the initial bonus, but maybe 10+ points could give something extra.)

Welp, here’s the big one. A month and a half ago I finally got around to upgrading to Unity 5, but now my various plugins are pushing me into upgrading to Unity 5.1 sooner than later. I haven’t done it yet, but I’m dreading this one, to say the least. The previous upgrade already set me back weeks and the specific reason I have to upgrade is because of some old features being updated or removed, so I just know it’s going to happen again.

Mind you, I don’t want to overstate my frustrations: of course I know that it would take me probably six years of saving money to afford a programmer and make Dreamblazers “the hard way” rather than using Unity, so it’s still by far the ideal solution for me, but nonetheless there’s still always a slight loss of control when it comes to building a game on frequently-updated third-party software. You can never quite know when your flow is going to be broken and you’ll be sent on a wild detour.

All that said, ultimately updates are always for the best because of the new features they offer me, whether native to Unity or found in third-party assets, so this is also a time of looking forward with the future in mind.