I’ve got many things going on right now, each probably worthy of its own post, but the super-simplified version is this:

Suffice it to say that both good and bad events have made this a slightly overwhelming time for me! But are you interested in that? Well, even if you are, I don’t think a 3000-word post would be beneficial nor can I afford to put that many resources into such a post with everything I’m trying to juggle. So here are some pretty pictures instead!

Here’s Alex’s pixel art of Leaf, the Dreamblazers name-dropper! These are blown up to triple size for visibility’s sake. We considered three possible sizes for character sprites, but I took a quick poll of just a few carefully selected people (Flora because she’s an artist who doesn’t game much, another friend who games a lot but isn’t an artist, a third friend who games and is an artist, and of course Alex as the pixel artist got input) and this size ended up winning.

Shown here are all of Leaf’s sprites except for identical versions that don’t wear her sword, but for future characters I won’t necessarily be able to show all sprites for spoiler reasons, just like I hid some dialogue portraits. =) More characters coming in the following weeks! 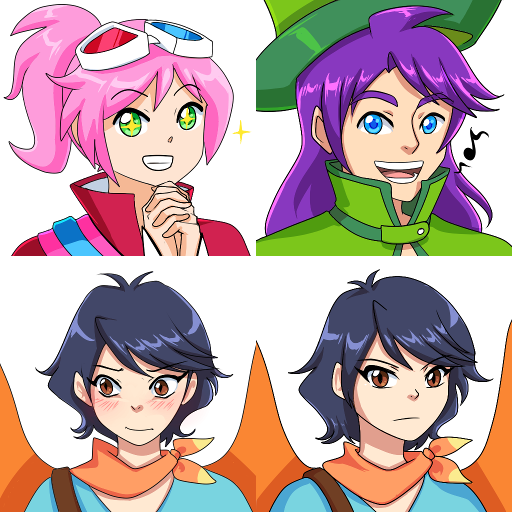 Extra portraits! How did Flora catch that Jig’s gloves were missing before I did? How did I not have a singing portrait for Tango, the bard? How did Evelyn not have a serious face, the second most crucial behind only a normal smile? And as for her other face and its fairly mysterious nature (keeping in mind that she already has two other less ambiguous blushing faces), well, you’ll have to wait for the game to see when she uses it! =P

Not pictured is an additional new face that’s lumped into spoiler territory. There are now six characters (but not necessarily only six portraits!) with some unrevealed faces behind the scenes. : D