Back to the animation grind! 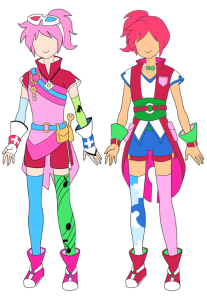 Here are Jig and Berry, the final character designs to be added before I finish a playable prototype! Jig, shown on the left, was going to be the very last one, but Berry emergently popped into existence during my coloring process when that red jacket looked amazing but didn’t seem right on Jig. But who is Berry and why does she look so similar to Jig? Find out on the next exciting episode of Dragonb—uh, I mean, Dreamblazers devlogs!

Ah, all the art is finished… 2014 is ending and a new beginning is upon me—one without a steady flow of character designs coming in, but hopefully with a steady flow of pixel art. I actually don’t know what I’ll do with these devlogs in 2015; after I’ve got animations and the 2D camera down, my efforts will go to cutscenes and writing, but updating with “wrote 14 scenes and tweaked 3 old scenes” every week sounds dull at best. However, I do assume that making characters automatically move around exactly when I want them to will give me all kinds of trouble, so maybe it’s fine and I’ll be able to complain about roadblocks all the time again. =P

I also hope that writing isn’t a slog. As a creative person, I do love my characters (10 hours playing with the fill tool for Jig, 2000 words of feedback for Cotelle…). As a gamer, I realize that others will mash through cutscenes without caring just like I do. It’s a tough balance. Bestiary flavor text is/was my favorite, though: I draw a lot of inspiration from Pokémon, so I consider it important to ask what monsters do when you’re not fighting them. Answering that question brings a sense of cohesion to the game universe, but it always feels iffy to insert that into mandatory dialogue, so bestiaries are where it’s at.

Finally, my earlier Dragonball line wasn’t only a throwaway joke. =)

Since today concludes the character designs other than small tweaks, at some point in the next few weeks I’ll have an organized picture with characters grouped according to their relationships instead of shown in the order they were completed as they are now. They’ll also have mini-profiles with stuff like character classes and species, plus more characters will be showing their nicknames (“Hikaru Wilder, Cerulean Cleric”), not only the seraphic sisters, Imperial agents, and Kelly.

I might even have fun facts and trivia about some characters’ creation and what they’ve meant to me over the years! For example, today’s Berry was inspired by Dragonball Z way back in the late 90s and she’s been a part of my Dragon Quest IX and Etrian Odyssey III parties. That kind of stuff used to go on my wiki, but somehow my own wiki has locked me out of editing it right now, so until I get that resolved, I can put it here instead.

Why do this all of a sudden, though? Because once the title screen image is finished, I’ll be taking things more public (very slightly more public) and posting in the Showcase section of the ORK forum!