Before we get to this week’s new pixel art…

Up to this point, I’ve generally shown off an enemy sprite, then used it as a launching pad to explain that enemy’s unique traits and how it teaches and guides players as they go. To recap some highlights:

As for today… Today I get to talk about something that I only briefly hinted at before with the Centaur Warrior’s week.

These are, from left to right, a Kobold Chief, Kobold Rogue, and Kobold Warrior… And you had better not expect to ever run into one of them by itself! These dogs thrive in packs—no, more like in tribes. For decades, kobolds have been one of the species considered most on the verge of sapience without being there. The Empire developed a keen interest in their future development, but nonetheless saw fit to leave them alone and restrict the common species’ access to their dwellings. So why are you, the player, encountering them? Well, obviously either they’re coming out into your world or you’re going into theirs. Time will tell which!

Regardless, things have changed since last the Empire looked into this species. For one thing, they wear clothes now. For another, they’ve learned division of labor and how to maximize their unique talents and abilities. For a third, they now know how to (briefly) exceed the speed of light.

Because, ya know, if you’re making an RPG then you better go big. Now let’s talk about the meat: how do they fight? I won’t go into too many spoilers here because I love the way these battles have played out too much in testing to disrespect them by explaining everything, but I’ll give a couple snippets…

The most important thing is that, while there are only three types of kobolds, you’ll usually run up against a half-dozen of these creatures or more. Suppose you run into two Chiefs, two Rogues, and two Warriors and you don’t know anything about what they do in battle other than their names. Which kobold do you go after first? Most people would probably say one of two things:

(Note my careful wording; there’s no killing enemies in Dreamblazers.)

That’s just your general common RPG knowledge! Even putting that aside, you might notice from the different animation speeds that the Rogue is the fastest, the Chief is almost as fast, and the Warrior is the slowest. So it makes tons of sense to leave the Warrior for last, right?

Well… no. Why would I make it that easy? ;P I have a chart just to make sure that the enemy designs are interesting enough to battle against: 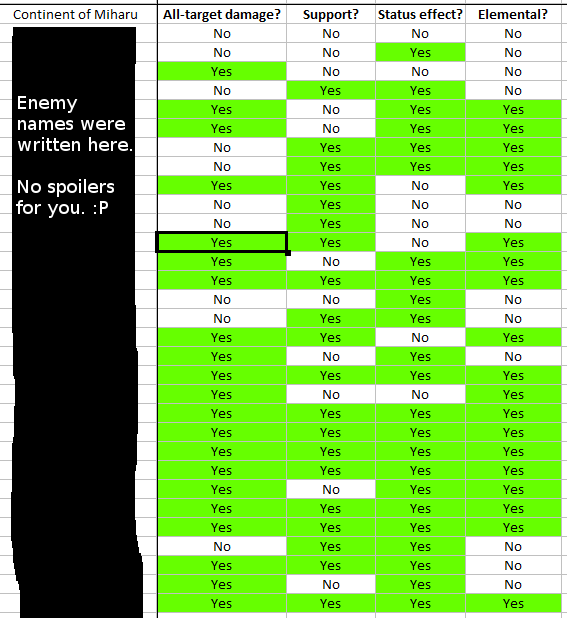 After all, turn-based battles (and arguably even real-time battles) get old fast if they’re only about slugging it out with damage numbers on both sides. Kobolds fight with style and intelligence and the bottom line is that there’s no right or wrong choice of which one to go after first: they’re all high priority targets, so take them as you see fit.

Let’s end on a brain teaser. I’ll give away one ability for one type of kobold: the Chief can call 1-2 extra Rogues or Warriors into battle and they’ll show up that very same turn. Given that fact, how could I ever say that it’s not necessarily right to battle the Chief first?