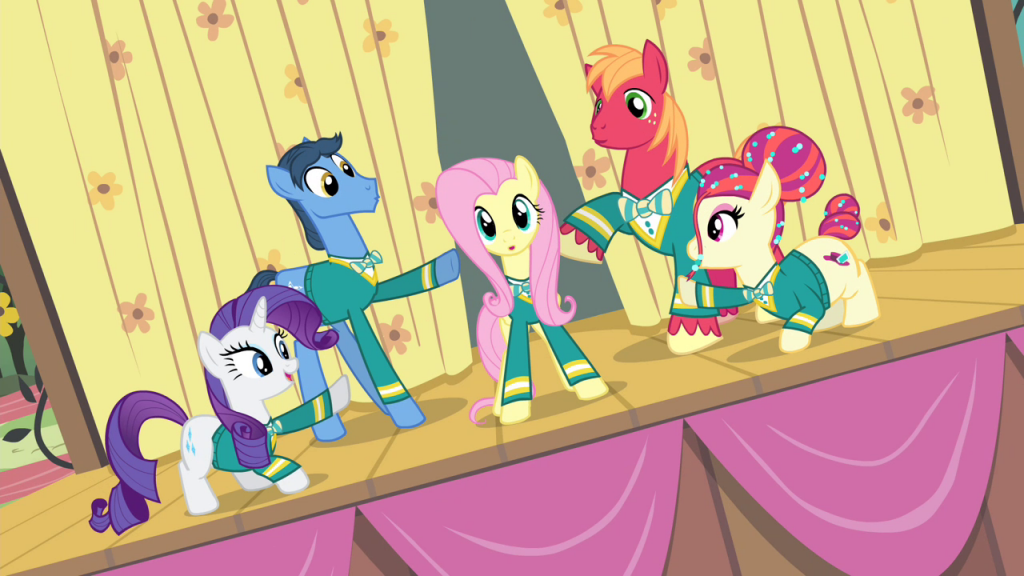 She writes a fun Applejack (Applebuck Season: B+), a super Apple Bloom (The Cutie Pox: A+), a stellar Fluttershy and Rarity (The Best Night Ever: B+), an amazing snarker (A Friend in Deed: S), insanely-odd parodies (MMMystery on the Friendship Express: B+), entertaining action (The Last Roundup: B+), and of course I said my piece on Pinkie Pride in part 3.

…all of which is why it’s so strange that most fans seem to have gotten a much bigger kick out of AKR’s Bridle Gossip than I did. That episode is probably most famous for giving Fluttershy a deep bass voice, and we’re here in Filli Vanilli to bring back Flutterguy. This episode centers around her filling Big Mac’s role in a quartet after he loses his voice, but being scared that anypony will find out that it’s her. It’s funny for a while and there’s a heartwarming message at the end about letting your true self shine, but overall Filli Vanilli doesn’t reach the heights I’d like.

“This is a really exaggerated episode,” I said aloud to myself in the first four minutes. Usually I wouldn’t be saying that in a negative sense. …and I actually wasn’t saying it negatively here either, but I certainly raised an eyebrow over the following facts:

For most people, Pinkie is the biggest problem here. For me, she’s the smallest. You see, nearly all of the ponies have had their moments of being intentional jerks to each other, notably all of Fluttershy’s friends teaming up against her in Bats! Here in Filli Vanilli, Pinkie didn’t even know she was scaring her. This is less Bats! and more Fluttershy accidentally freaking Rainbow Dash out in Sonic Rainboom or Twilight unintentionally pulling Fluttershy into a situation where she didn’t want to be in Dragonshy. There’s not a bad girl and good girl in every situation. Reading the social situation wrong happens.

My big issue with Filli Vanilli is that I just don’t understand, credibility-wise, how this episode can happen in a world where Fluttershy’s marched through the streets of Ponyville singing in a parade twice (“Smile Song” and “A True, True Friend”) and then did it again in Canterlot (“Life in Equestria”).

Put that aside and it’s a fun ride with a sweet conclusion, but still nothing that’ll stick with me long-term.

For some reason, Twilight and Rarity say to Pinkie that she didn’t tell Fluttershy she was great, but, um… the first words out of Pinkie’s mouth in the scene before were “That was totally unbelievable!” I guess she could have meant it literally (“That was statistically improbable and therefore difficult to believe even though I personally observed it!”), but I never thought that even on my first watch.

Nice supporting-cast Rarity here protecting her friend Fluttershy during their performances, but also understanding that she secretly wants to perform. I love drama queen Rarity, but I like clever and warm Rarity too and that’s what I got. The relationship between these two friends is so well-established and sweet in Filli Vanilli and Green Isn’t Your Color.

Did she even have a line? This is another in a long list of season 4 episodes where all of the Mane 6 are included even though only a few are needed. 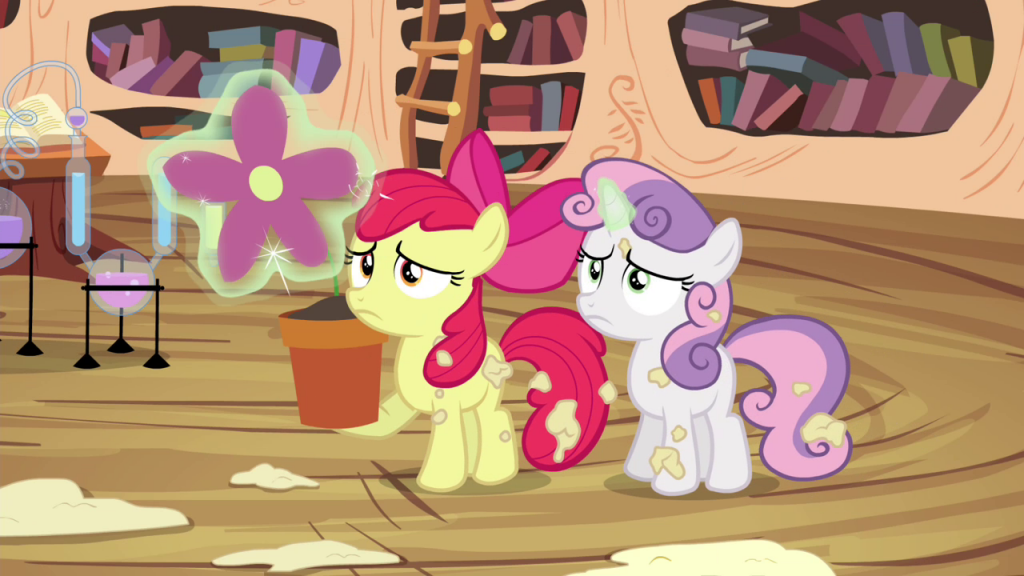 Contrary to the title, the Cutie Mark Crusaders return! While the episode may not be up to the standards of Flight to the Finish, who can say no to Sweetie Belle finally learning how to use her magic under the teaching of Twilight? Between that episode and Twilight Time, I’m half-convinced that the CMCs are more dynamic characters with greater growth potential than Rarity and Fluttershy (and Applejack, but I’m full convinced about that, not half).

That’s about where the good of the episode ends, though. Sure, there’s a zombie mob, Sweetie Belle’s always-lovable squeaking, Scootaloo posing and camera-hogging, and a certain Twilight Sparkle scene, but it’s mostly a by-the-numbers story: the CMCs become well-known for hanging out with Princess Twilight and their situation and popularity spiral wildly out of their control.

Like Rarity in Sweet and Elite, the CMCs dodge bullets for much longer than conventional storytelling would usually allow as Twilight seems ignorant of the situation (in both episodes), which makes for an interesting twist. The flaw of Twilight Time, though, is that there’s no ambiguity about the Crusaders’ motivations. Rarity is a complex enough character that I could actually believe she’d have a lapse in judgment, pull a Peter, and deny her friends three times. The Crusaders, however, never waver in trying to protect Twilight, balancing two motivations instead of having to make a choice.

I’ve seen some hate for this episode. While I disagree, I’ll fully admit that a person needs to be very attached to the Cutie Mark Crusaders to get very much out of Twilight Time; developing new talents is the main joy on tap here. It’s a great thing that Flight to the Finish aired before it. 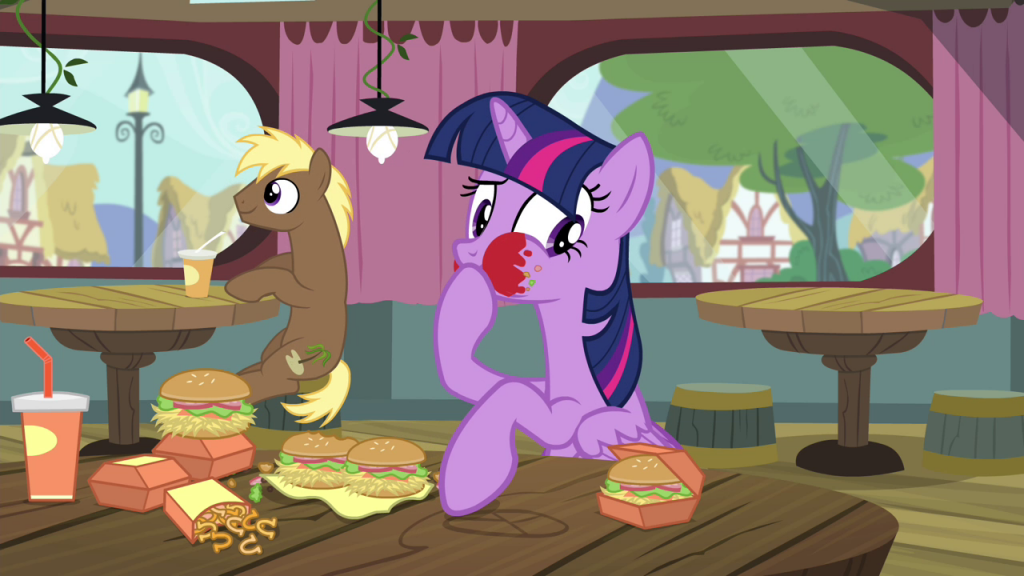 Twilight, are you sure you’re not related to Pinkie Pie? Better dig back through those genealogical records! Pinkie actually appears in this scene just a few seconds later and it’s the craziest thing to see her not being the pig out of these two. Well, the craziest thing until next episode, anyway…

Episode 16: It Ain’t Easy Being Breezies

Grade: Incomplete (but a B for what was there) 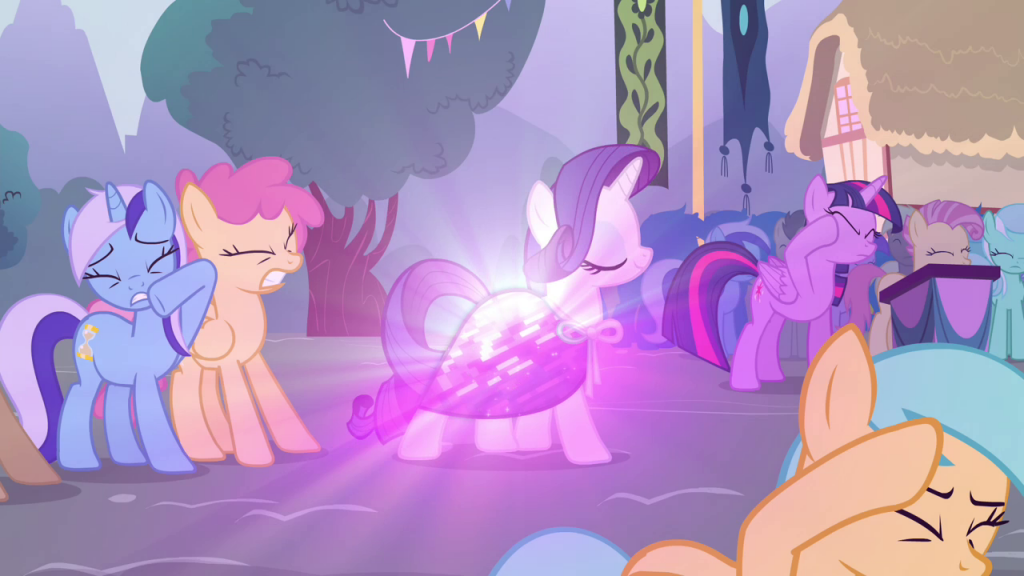 This episode is the most insane thing ever. Ever! It starts off so unassuming as Fluttershy attempts to coach her friends in the art of quiet cheering, like an opposite world Sonic Rainboom intro. Then we start the episode proper (or so we think). We go through some exposition with weather pegasi and the Cakes, then Rarity shows up and things take a turn for the incredible.

Rarity is wearing an amazing piece of clothing that looks like a disco ball and it’s too bright for everypony. Fluttershy approaches and tells her it’s a bit too much, but Rarity hilariously misinterprets her to mean she thinks it’s too purple and blames Twilight’s feedback while Twilight feigns innocence in the background. Now, already this is one of the greatest Rarity jokes of all-time, but then she takes off her cloak and… 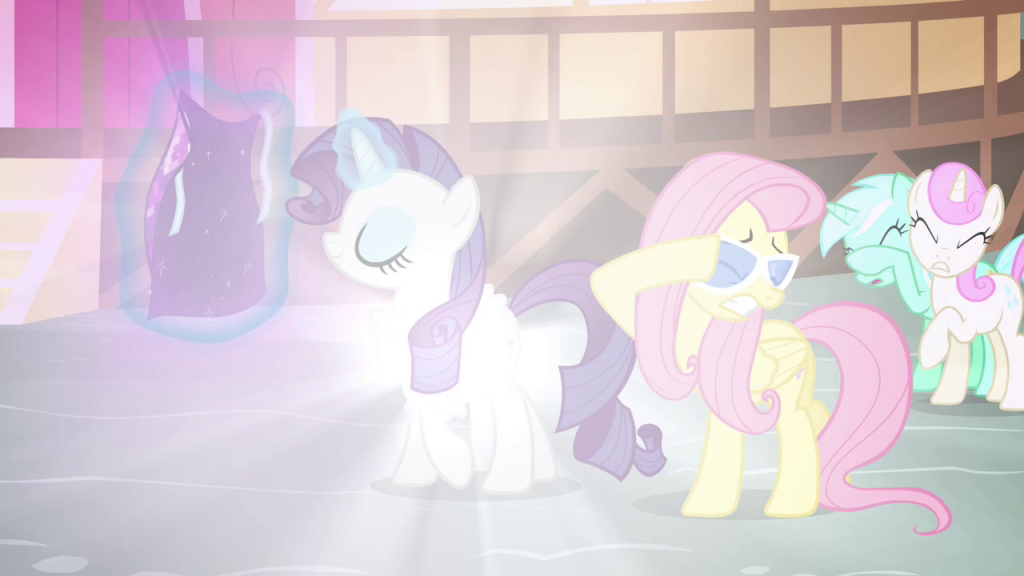 …what she’s wearing underneath is so bright that the rays of light slowly stretch out to the corners of the screen until the whole screen goes white! And then it stays that way for the rest of its running time!

I think the point here was a super meta-gag. They’re basically acting like My Little Pony was shot on old-school film instead of created digitally, so the joke is that Rarity’s clothes are so bright they overexposed the film she’s on.

Now, you may be wondering why I call this the most insane thing ever. Yes, I know MLP has technically done something like this before. In Apple Family Reunion, Pinkie Pie poured glitter out of a window, but there was too much glitter and it filled up the screen and became so heavy that it tore a hole through the fabric of reality, preventing the rest of the episode from existing. As insane as that is, though, at least you could say “Well, that’s Pinkie Pie.” How did Rarity erase a whole episode?

Episode 17: Somepony to Watch Over Me 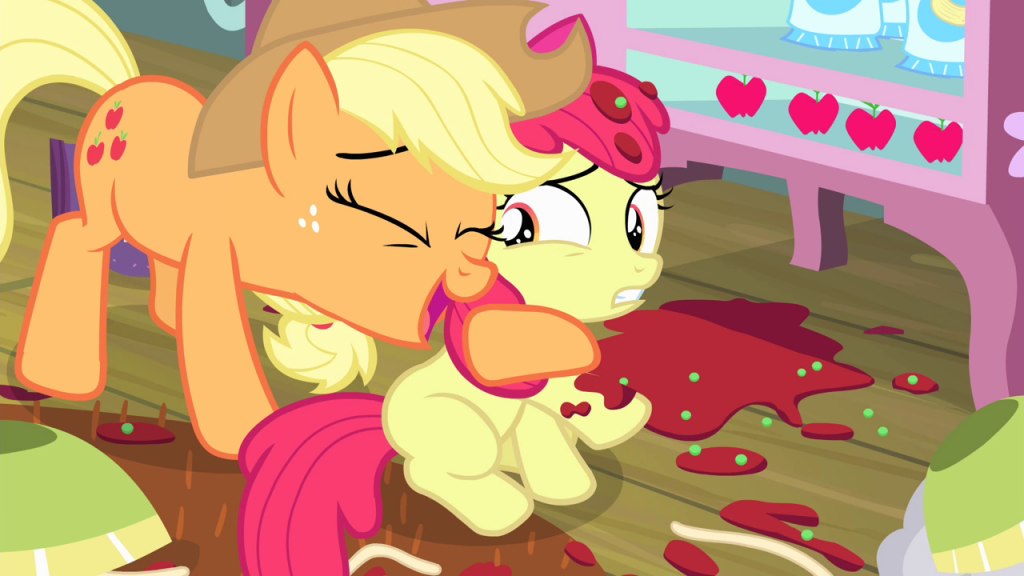 After some mid-season misfires from Simple Ways onward, season 4 gets back on track by going back to the well: a new writer, Scott Sonneborn! If there’s one thing that season 4 makes clear, it’s that my ideal world is one in which every episode is either by Amy Keating Rogers, Meghan McCarthy, or a first-time writer (who then doesn’t return). Rarity Takes Manehattan is the only episode I would have really missed (read: gave a B+ or better) that falls outside those criteria.

Anyway, Somepony is what Feeling Pinkie Keen would have been if I enjoyed its third act: half of a slice of life episode segueing into half of an adventure episode and both parts cooperating in perfect harmony. Apple Bloom is old enough to stay home alone, Applejack can’t handle this and becomes ludicrously overprotective, and Apple Bloom escapes her with the help of her friends only to wander into a dangerous swamp with exploding fire pits and a chimera. Works for me!

While Applejack Syndrome is still in full effect, making her do whatever the plot needs her to do, at least this edition of “whatever” is something other than standing around watching all the other characters move the plot forward. I really had a blast with Applejack in this episode because I finally understood what her character was doing and why she existed in the narrative. 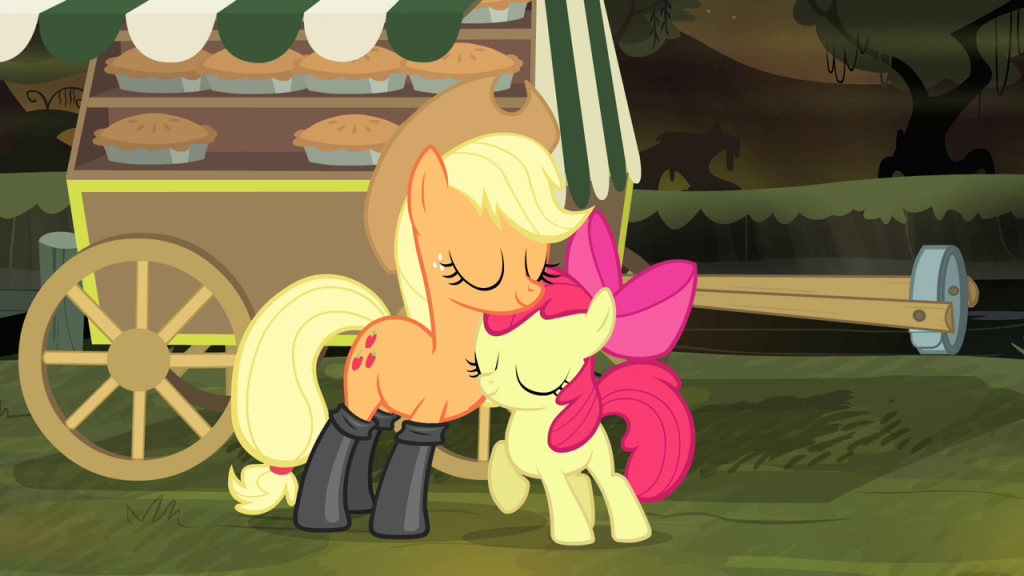 My core problem with Applejack, which this episode actually resolved (!), is that in a show called My Little Pony: Friendship is Magic, a character who’s known mostly for her family dynamics doesn’t stand out. Now Applejack is overprotective. Now she’s known for going too far. Now she’s a worrywart.

Character traits! And funny ones at that! This is the only Applejack I’ve ever missed: the Applebuck Season Applejack who’s blown out of proportion. 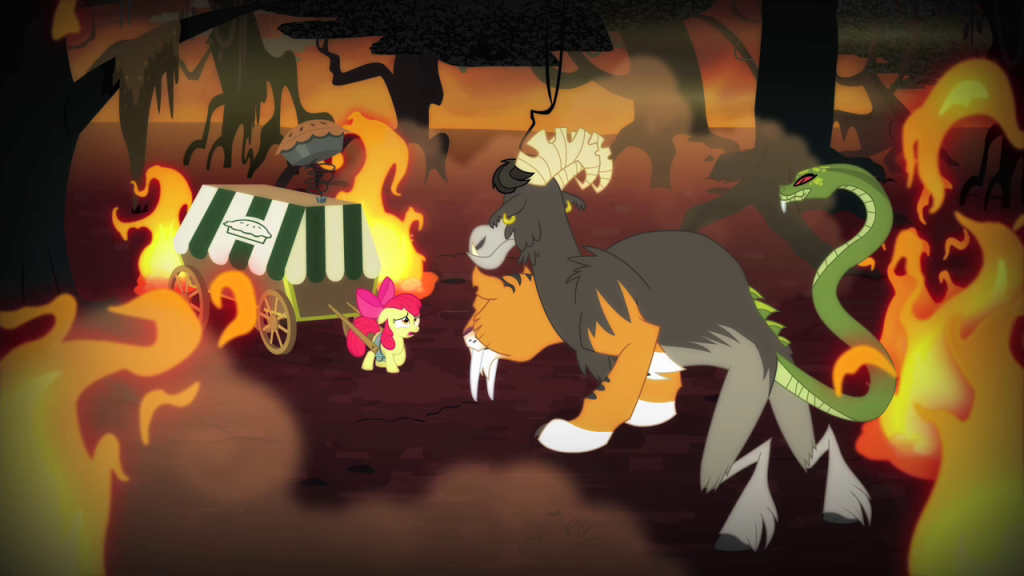 Meanwhile, Apple Bloom proves her competence by mostly outmaneuvering a chimera. Like I implied of Flight to the Finish, the Cutie Mark Crusaders actually face greater challenges than the Mane 6. In that case it was an emotional challenge, but here it’s a physical challenge posed against a character who doesn’t have the skillset of a pony like Twilight Sparkle, Rainbow Dash, or Applejack. This is real stuff and it’s pretty intense.

I do find it interesting that Applejack contacted Rarity to watch over Sweetie Belle and Scootaloo. If she was aiming for the most responsible pony, I suppose she wouldn’t be a bad choice post-Sisterhooves Social, but I’d still go to Twilight first, then Fluttershy (who, if you’ll recall, Rarity herself delegated to in Stare Master), then Rarity.

Maybe Applejack just considers Rarity her closest friend. If that’s it, then at least she has good taste in friends!