Scott Sonneborn returns after Somepony to Watch Over Me and doesn’t break the trend of my preference for a new writer’s first episode. I give it a B- purely on a technical level. I can’t say anything’s explicitly wrong with Trade Ya!, but I also don’t like it one bit.

The basic premise: the Mane 6 are at a trading bazaar at Rainbow Falls and go around to trade stuff. That’s extremely simple, but hey, Castle Mane-ia was ponies wandering around a spooky castle getting scared, so that’s cool. Thing is, though, that in Castle Mane-ia the only scene I like is all of them and in Trade Ya! the only scene I really care for is a little filly wagging her tail because she wants Twilight’s autograph.

The question I struggle to answer is how much of what I don’t like is this standalone episode’s own fault.

One (well-earned) criticism of season 4 up to this point had been that Twilight became a princess and then that didn’t amount to anything. Sure, she has wings, but nopony in Ponyville seems to notice her at all (except schoolponies in Twilight Time, but even they didn’t notice until Sweetie Belle accidentally planted the idea in their heads). She’s an alicorn princess and can’t even get a cab in Manehattan. Fluttershy and Bulk Biceps are apparently faster fliers than her since Rainbow Dash doesn’t ask for her help in Rainbow Falls (the episode). 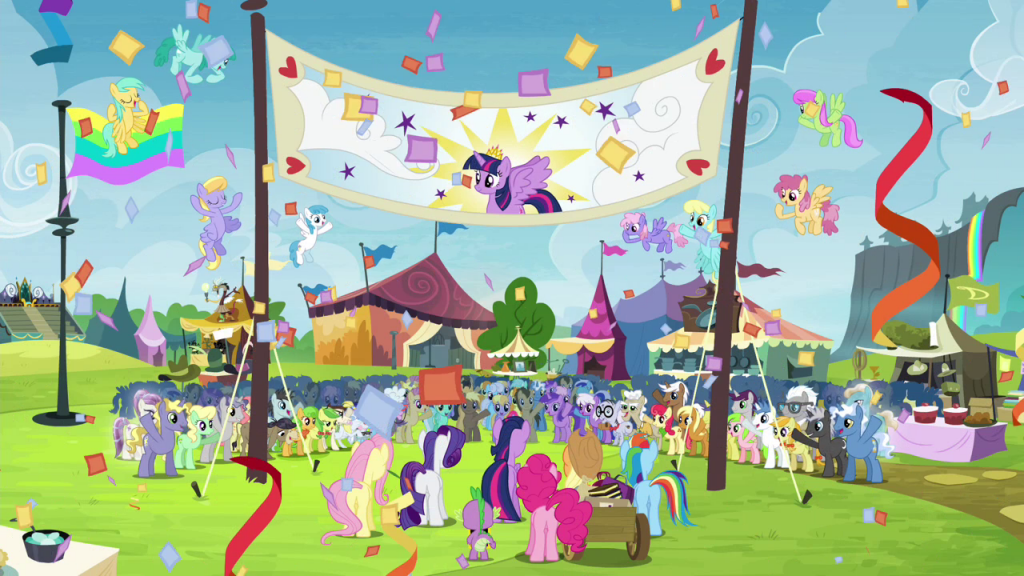 Here in Trade Ya!, all of Rainbow Falls (the location) is so excited about Princess Twilight’s arrival that they have a banner and greeting crew ready for her. If this had happened in episode 5 I’d be perfectly accepting, but it really bugs me that suddenly her princess status matters in episode 22 of 26. Whose fault is it that the episode showed up so late? Not the writer’s, I guess (and I realize that originally it was scheduled to be episode 18), but knowing that doesn’t make me any happier.

So Twilight’s there to oversee that everyone gets fair trades, but since there’s never been a trade dispute, she expects that she won’t have to do anything and just brought some books to trade away.

Hold it. Twilight getting rid of her books? That’s material fit for an episode about depression or questioning your own self-worth, like Pinkie Pie putting away her party cannon in Pinkie Pride, not a minor plot device to just toss out there because the story requires it.

Twilight getting rid of books. I can’t get over it. The episode justifies this by saying she doesn’t need them anymore, but does she not remember Discord getting sick in Three’s A Crowd, Pinkie Pie cloning herself and her clones cloning themselves in Too Many Pinkie Pies, or Apple Bloom giving herself the Cutie Pox? Anypony who’s seen as much crazy nonsense as her should know not to write off anything here in Equestria, where unexpected stuff comes up all the time and Twilight goes flipping through a couple dozen books in search of a solution. 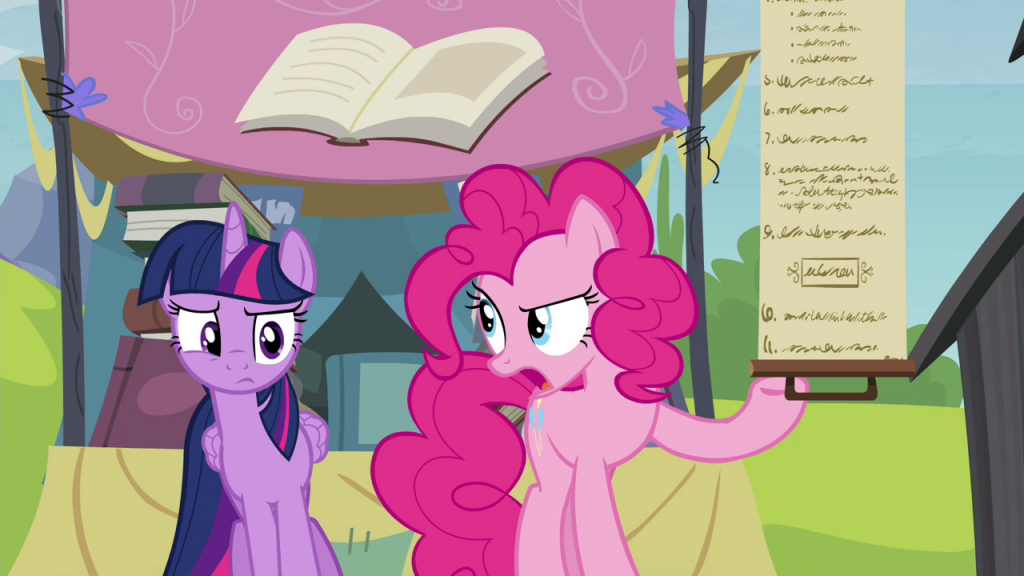 Then things get even weirder. A filly offers a broken quill for all of Twilight’s books and Twilight’s about to take it, but Pinkie Pie freaks out and stops her because the rules of the Traders Exchange say that a trade is only fair if both parties get what they want. Since when does Pinkie Pie have any respect for rules? And since when does Twilight not? Twilight cares about them so much that Lesson Zero happened.

If this exact situation happened in season 1, I’d have no problem with it. In fact, a similar situation did happen in season 1: Green Isn’t Your Color, an excellent episode where Pinkie’s obsessed with the deontological rules of keeping promises and secrets while Twilight battles her impulses to break her friends’ trust for a utilitarian benefit. …but that was a long time ago when the characters had much less history to draw on and it didn’t conflict with anything that we knew about them.

Anyway, the reason Pinkie Pie is available to have an ethical conundrum with Twilight is because she never intended to trade anything and had nothing better to do, so why did she even come to the Traders Exchange? And why did the episode open up with her dialogue about being excited to go there?

By the way, I need to stress these were all thoughts I had on my first watch. I try to be extremely uncritical of any episode the first time because I want to understand what the writer was going for (whether they succeeded or not). I try to “shut off my brain” and usually I can do it. Not here. Not at all. 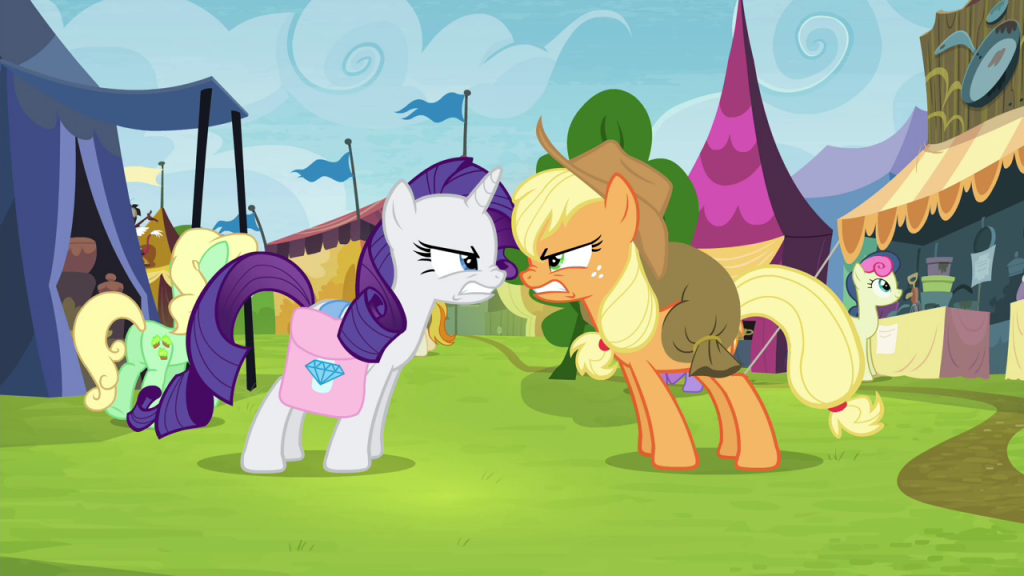 It’s not Scott Sonneborn’s fault alone that the show keeps digging its pickaxes into the same dry rocks without checking the other gold mines nearby, but I don’t totally absolve him of responsibility either.

All of the above is only about 20% of the episode screentime, so Pareto’s Principle kicks in yet again: 80% of the issues come from 20% of the show. The rest is spent with Rainbow Dash and Fluttershy wandering around making a Legend of Zelda trade sequence. It’s technically serviceable, but I was just left bored by it because it’s bog standard Rainbow Dash and Fluttershy with no particular character development in play. I like some frosting and sprinkles on my slice of life, ya know? May the Best Pet Win! is so much fun because we see excited Rainbow Dash and excited Fluttershy, not just their everyday mundane lives. 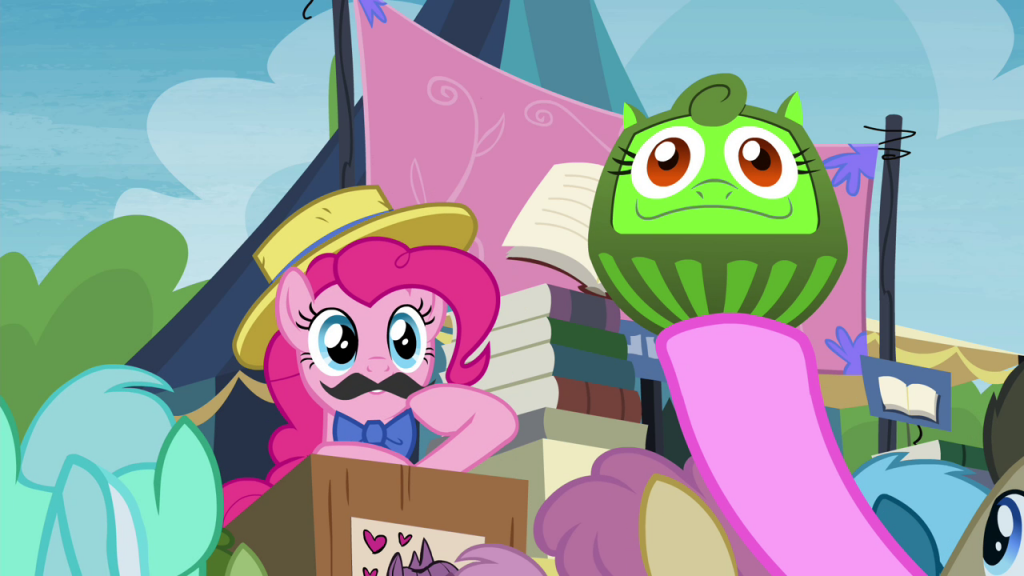 Everypony learns the same lesson in this episode—friendship is more important than material goods (about as self-evident a lesson as this show has ever, ever given)—except for Pinkie, who learns the value of not overhyping your own product to the detriment of being capable of selling it. Kind of interesting, I guess.

Eh. For the character who has the most screentime and story focus, she sure doesn’t do much other than complete a sequence of events that are all essentially the same thing and serve the same end. I don’t hate this episode anymore, but I’m just so bored by it. 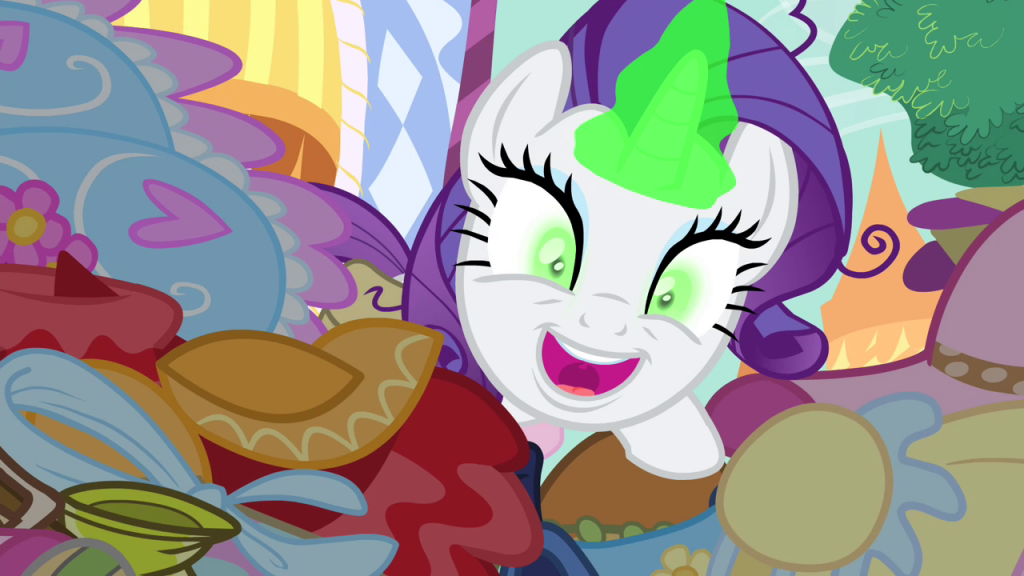 In Inspiration Manifestation, Rarity kind of goes crazy but not really; she’s possessed by the dark spirit of the Necronomicon (or at least an analogous cursed book) and starts creating things purely through her will, causing problems all over Ponyville. In a sense, Sonic Rainboom is more a Rarity-goes-crazy episode than this. Oddly enough, Inspiration also takes place predominantly from Spike’s perspective, as he’s the one who gives her book and the only one who can break the curse.

If I was mainly a relational viewer, some of Spike’s episodes would be near the very top of my list, namely Owl’s Well That Ends Well and Secret of My Excess. My actual rankings of the Mane 6 plus Spike are as follows: 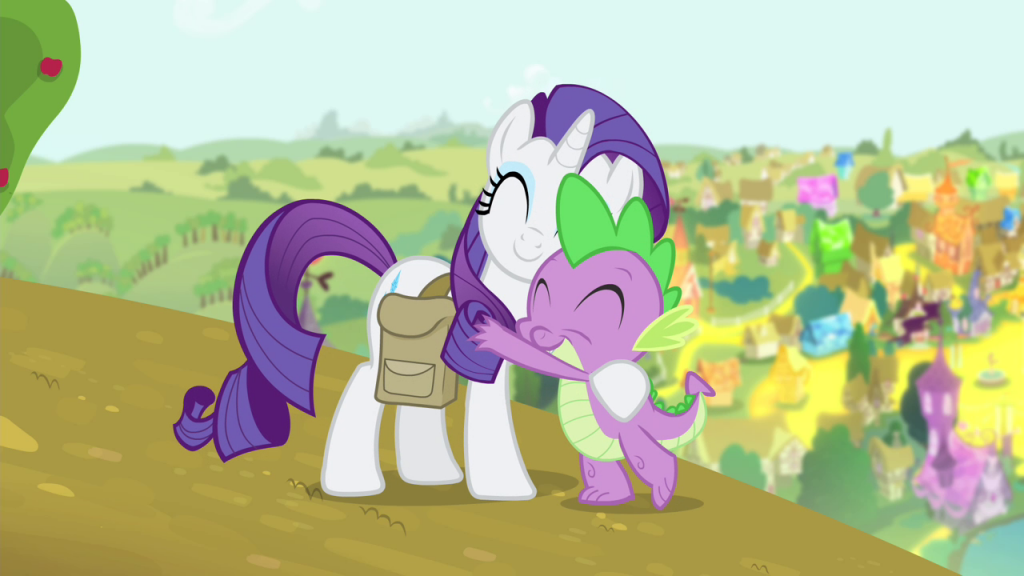 Spike is a dragon living among ponies: even though he shares their values, he’s physically different and there’s no escaping it. I find no other relationship in MLP as interesting as Rarity and Spike; it’s extremely likely that his crush on her can never go anywhere just by the nature of their species. This might actually be, even if unintentionally, the most accurate and positive portrayal of asexuality I’ve ever seen: an “innocent” (purely spiritual) and yet doomed romantic desire.

Or maybe I’m just reading my own “orientation” into it. I don’t know. One thing that sets Inspiration Manifestation apart from episodes like The Cutie Pox or The Return of Harmony Part 2 is that Cutie Pox and TRoH are vehicles for nonstop comedy without deeper meaning, but Inspiration is a vehicle for deeper meaning that gets obscured by nonstop comedy. What are the duties of a friend? What’s the value of a friend? When is it worth putting a friendship at risk? Can one choose the well-being of a close personal friend at the expense of a larger society who one doesn’t know? What is “well-being” for a friend? These are the questions, but they’re buried beneath the surface until the last couple of minutes. 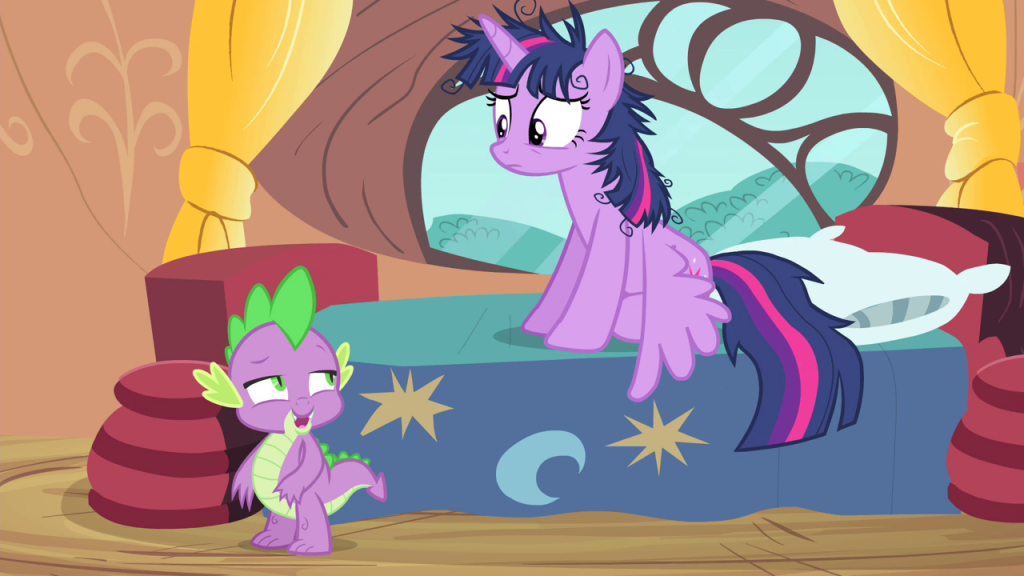 The closing scene with Twilight and Spike actually accomplishes as much as or more than the rest of the episode. Not just because hilarious Twilight has been absent, sorely missed post-It’s About Time, and is the best Twilight of the season (yes, including the finale), but because it shows genuine friend dynamics, highlighting the sincerity and openness without skirting the rough patches.

A fun episode, just one that didn’t know what its preferred identity was.

That is all and that. Is. Amazing! 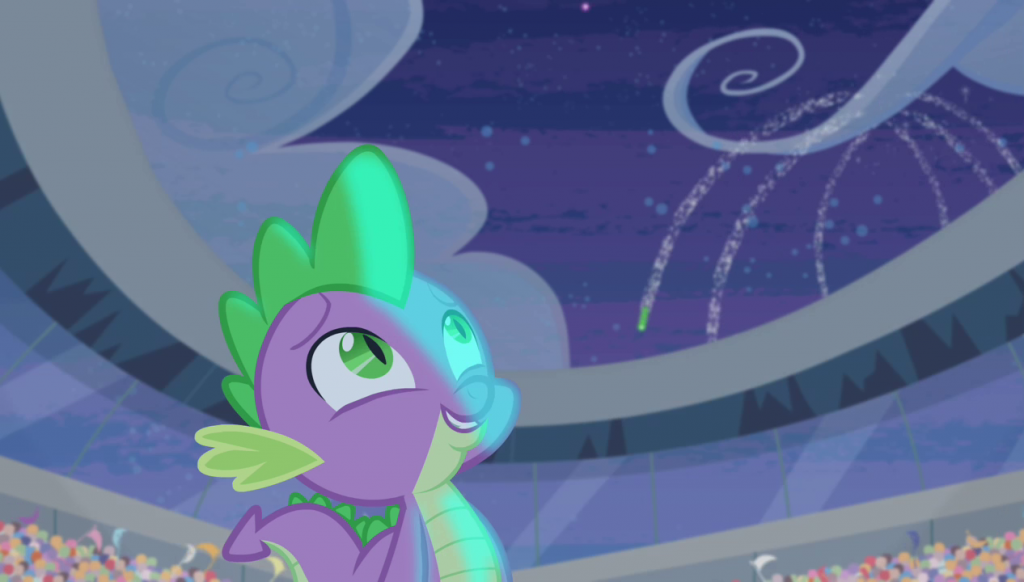 Equestria Games offers up the greatest moral in series history:

“No matter how many times others tell you you’re great, all the praise in the world means nothing if you don’t feel it inside. Sometimes to feel good about yourself, you gotta let go of the past. That way, when the time comes to let your greatness fly, you’ll be able to light up the whole sky.” -Spike, Equestria Games

The beauty of the moral is that it’s more universally applicable than anything else I remember My Little Pony doing; a loner or a person with a very small circle of friends might not take to the various relationship morals, but this is a message purely about the one person everyone has to live with: yourself.

Do the ends of the moral justify the means of the rest of the episode, though? My answer is “kind of.” The strangest element of Equestria Games, as everyone knows, is that the Equestria Games—the Olympics of this universe—have been foreshadowed since episode 12 of season 3, yet for some reason this is a Spike episode and we only see a couple of events, leaving a lingering feel of confusion hanging over the whole show. I’ve watched it three times and that never goes away.

It’s the sort of episode where you just wonder what could have been. I remember back in season 1 when Applejack was actually very interesting and believed she was the best athlete in Equestria. What if she’d participated in the Games? What if Pinkie participated in the Games and used her super speed in a race? What if Granny Smith and Apple Bloom did their synchronized swimming (assuming there’s a swimming event)? How about Big Mac in a strength-based competition? Diamond Tiara’s butler Randolph using his great acrobatic talent? Can we see a little more of the griffons? 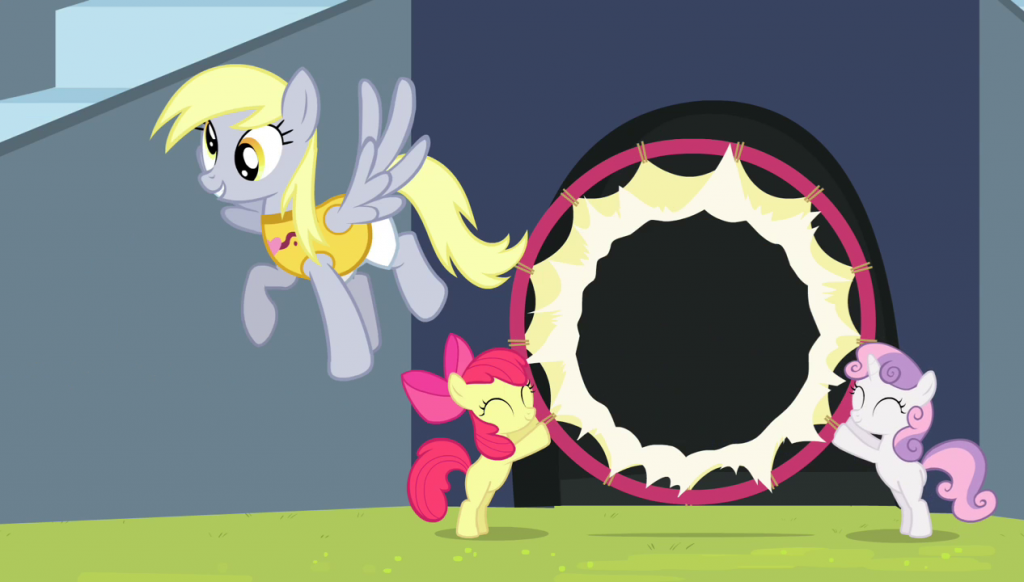 I don’t even know if that would have been an interesting episode, but at least it would be nice to find out instead of wondering forever. Even when Rainbow Dash wins a silver medal along with Fluttershy, it’s so quickly glossed over without getting the attention it earnestly deserves.

What’s actually in the episode is fairly sweet, but rather tepidly-paced; most scenes took their time to belabor their point but lacked the necessary senses of action and flow that would have helped them feel alive. It’s not nearly as slow as, say, the opening scene of Flight to the Finish, half the episode in Three’s a Crowd, or the entire episode in Rainbow Falls, but just compare the length of time Spike tried to light a torch to the length of time when Rarity needed to decide between denying or affirming her friends in Sweet and Elite.

The finale! I’ll also cover various odds and ends about the season that either I didn’t want to put into the episode reviews or that came to mind only after posting them.