In the last part of my season 4 reviews, I wrap up loose ends, give assorted minor observations on some episodes, and give my series-to-date favorite episode and favorite pony rankings!

Princess Twilight Sparkle: B+
Castle Mane-ia: B+
Daring Don’t: B
Flight to the Finish: A+
Power Ponies: B
Bats!: C+
Pinkie Apple Pie: A+
Rainbow Falls: C-
Three’s A Crowd: B
Pinkie Pride: S
Simple Ways: C+
Filli Vanilli: B
Twilight Time: B
It Ain’t Easy Being Breezies: F
Somepony to Watch Over Me: A-
Maud Pie: A+
For Whom the Sweetie Belle Toils: B
Leap of Faith: D+
Testing Testing 1, 2, 3: A
Trade Ya!: B-
Inspiration Manifestation: B
Equestria Games: B
Twilight’s Kingdom: A

Season 4 began with a powerful opening salvo reminiscent of season 2, stringing together a showcase of consistently good episodes straight up until Pinkie Pride. Season 2’s salvo was stronger (two S grades, two A+, and an A), but season 4’s lasted longer (12 episodes vs. 10). I remember telling a friend, probably right around Flight to the Finish, that season 4 had washed away season 3 for me—meaning that this was the real season 3, that the quality never dropped and those were just mediocre memories that I owned on DVD mostly for completionism’s sake.

At the point of Simple Ways, though, things went downhill pretty quickly. There are still five episodes afterward with an A- or better, but otherwise the season 3 feeling returned through an extended run of good-but-not-great episodes. This is where personal tilt comes in. I’d actually rather have the show dare to try something and not quite hit the mark with me, like Bats! in season 4 or Dragon Quest in season 2, each a C+, than play it safe with a technically fine but ultimately uninspired and uninspiring episode like Trade Ya! or Twilight Time, B- and B episodes respectively.

Oftentimes “B” (or B-) stands for “backhanded compliment,” meaning that I had a good time with an episode but it didn’t stick with me. Season 4’s initial burst of creativity petered out over time, stopping with only a few exceptions after Rarity Takes Manehattan or Pinkie Pride. That would be fine if the execution was there, and certainly the wonderful animators, composers, and voice actors never let me down. It’s the writers who didn’t always deliver, unfortunately.

Still, I feel it’s best if I grade a season not on its average, but on the episodes that do stick with me and that I’ll be sure to return to time and again. On that metric, season 4 earns a spot above season 1 but still a small notch below the near-flawless season 2. There’s a lot to love here and a large percentage of it is among the series’ very, very best. 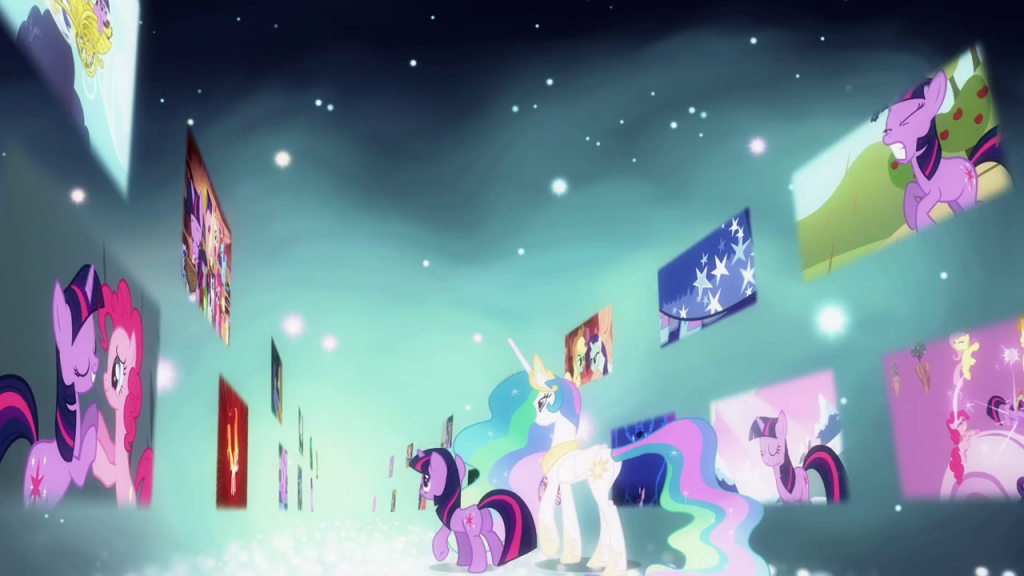 I’d always assumed that the line “I’ve watched you from that very first day” in Magical Mystery Cure was a figure of speech and that the hall of memories was a visual metaphor, but Castle Mane-ia really doesn’t help my case; at one point Twilight is pondering how to open the Tree of Harmony box and wonders if she should try the library at Canterlot, then immediately Princess Celestia sends a letter that begins with the word “Actually.” She heard her conversation? All the way from Canterlot?

This didn’t occur to me until later when reviewing Trade Ya!, but if Fluttershy is scared to perform on stage, why did she even agree to be part of a team in Rainbow Falls that would eventually go on to participate in the Equestria Games themselves? I’m totally willing to kick Filli Vanilli out of my headcanon right about now and I don’t say that for just anything! 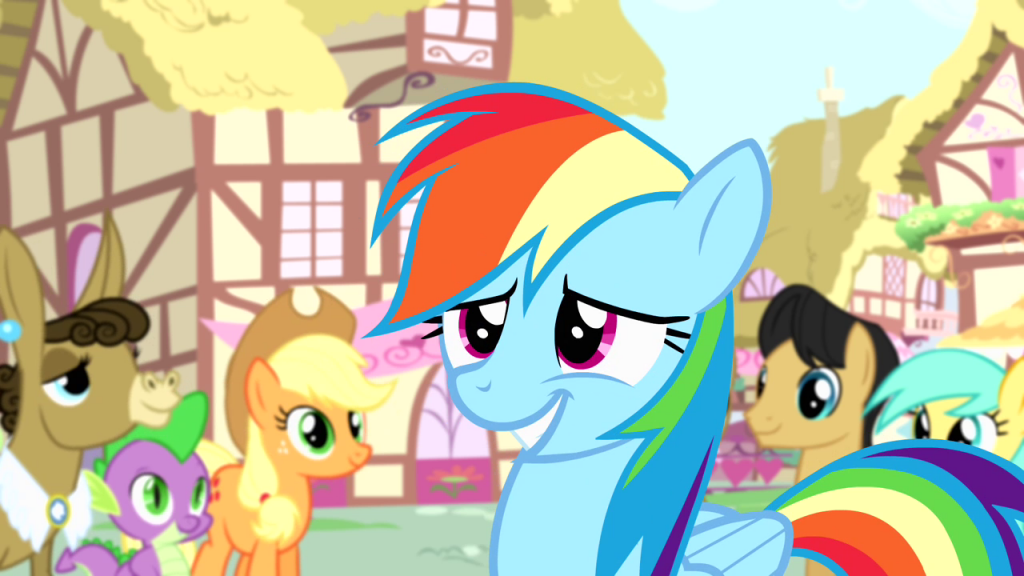 Considering the events of May the Best Pet Win!, I actually thought Rainbow Dash would be excited for a big, tense competition on her birthiversary. 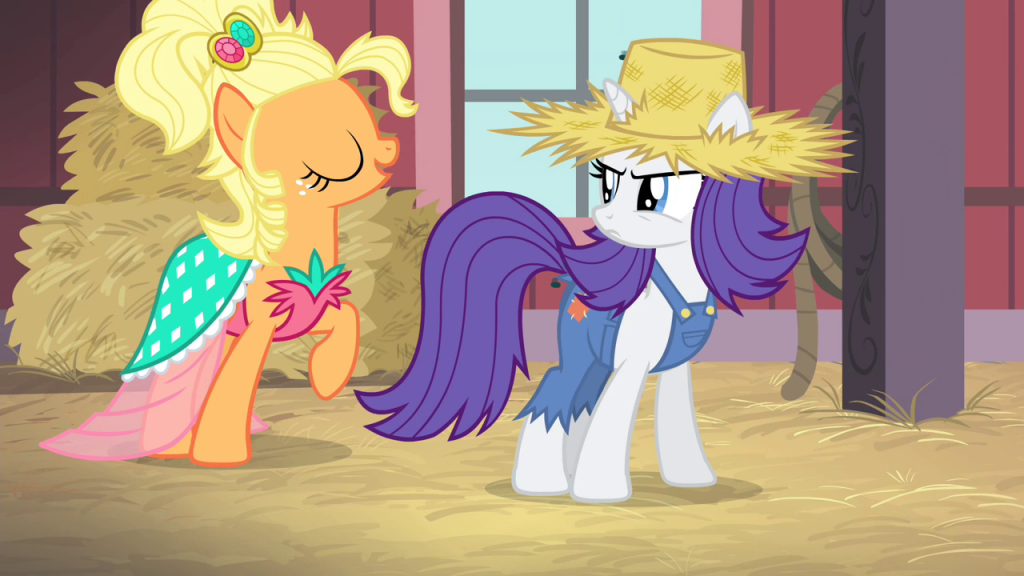 I’ve gotta say this episode has some curious presuppositions. When Applejack and Rarity say to each other “Because I know you” as proof that the other can’t be interested in fashion or farming respectively, the show has covertly slipped in a rejection of David Hume, the famous skeptic who put forth the notion that inductive reasoning is—

In all seriousness, though, why is it totally implausible that Rarity has developed a new hobby? If she did, would that in some way make her “not Rarity”? Is the abstract notion of character subject to the assumptions of mereological essentialism? In other words, if I change my mind, do I become a new person? If that’s the case, then that actually means “I” can’t grow as a person, because as soon as I change, the old dies and the new is born, just like in the B-theory of time—

It Ain’t Easy Being Breezies

Serious review: I was dead bored for the entire thing except that amazing Rarity joke and a couple seconds of Fluttershy wearing a bee costume. That’s more entertainment than Apple Family Reunion had, admittedly, but it’s not saying much.

Somepony to Watch Over Me 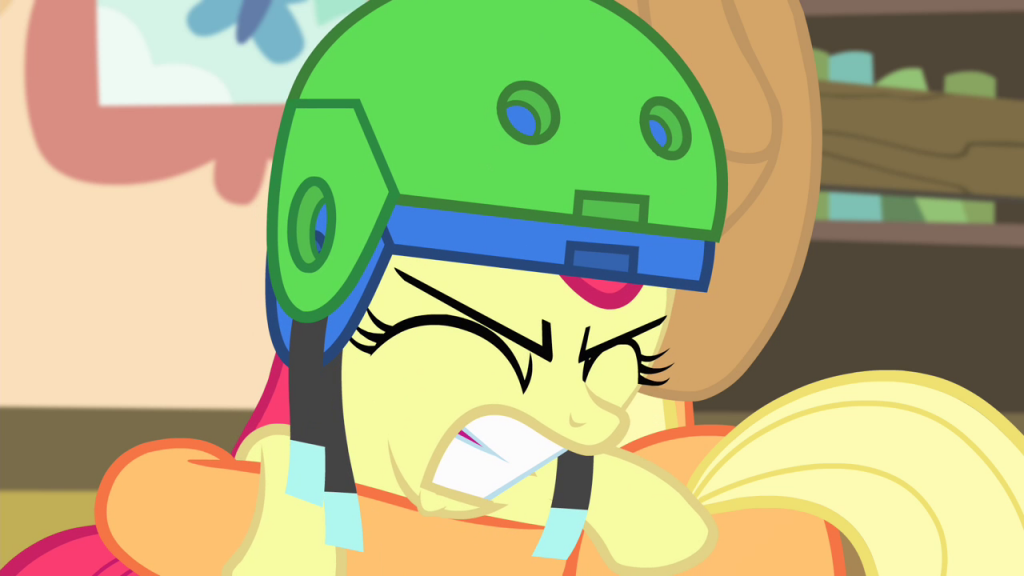 I’ve heard people say that Applejack is out of character in this episode. There’s a very easy joke I could make about this—and I will! If her character is Boredom Incarnate with a dash of Moral Perfection, then I totally agree. In this episode, she’s not that.

In all seriousness, treating this with 100% sincerity, until this episode I couldn’t have named a character trait for Applejack other than “hard-working” and “athletic,” the latter of which has been absent this side of The Last Roundup anyway.

Leap of Faith and Trade Ya!

All the pictures I used for my reviews came from the MLP wiki. I gathered them as I did each episode and one funny consequence came out… I put up the review with Leap of Faith in it going over a laundry list of controversial minority opinions I wouldn’t be surprised to see. The very next day, my review started with Trade Ya! and what should I find in the comments but someone saying they had a problem with the episode because the barter system is unfair and similar to communism. 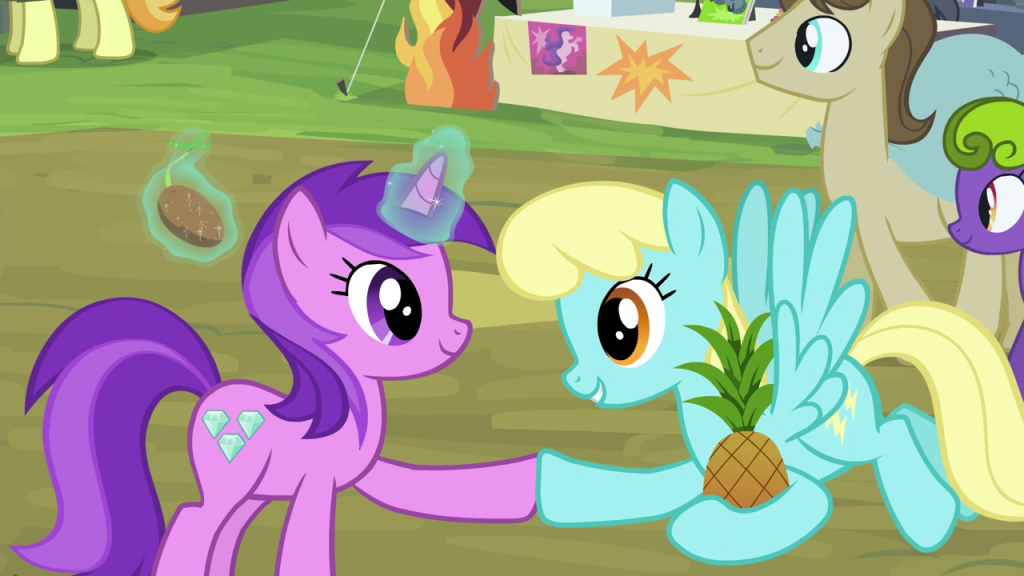 Like I said: stick your head into the philosophical waters and nothing will surprise you anymore.

Ironically, even though Pinkie Pride just affirmed determinism, Twilight’s Kingdom affirms free will since “You’ll Play Your Part” is founded on a metaphysical assumption that choice isn’t an illusion.

I’ll admit that besides Princess Celestia and Discord, there is one other obvious candidate for smartest character in the show: Pinkie Pie. No, it’s not because she has some kind of eidetic memory and can recall the birthdays of every pony in town. That’s not what I’d call intelligence.

A truly great mind is a creative mind: inventive, independent, and trailblazing. A truly great mind may not always introduce fully new ideas, but it can create ideas that aren’t presented to it. Star Swirl the Bearded, therefore, is a great mind; he created over two hundred spells. (Also note: in the comics his personality is compared to Pinkie!) While Pinkie Pie might not be quite that far yet, she invented a flying machine in Griffon the Brush-Off. 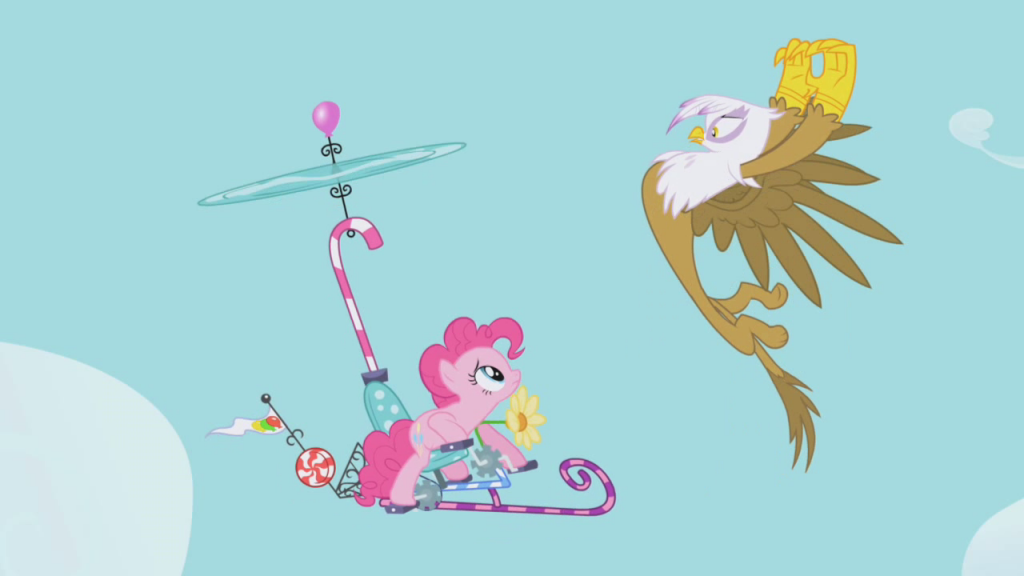 In Castle Mane-ia she intuitively grasps how to play an organ with no prior experience, which shows that she has strong problem-solving abilities and can relate her knowledge of other instruments to the organ despite their very different natures. (Similarly, in Pinkie Pride she displays a knowledge of Spanish; I for one wouldn’t be surprised to find out that picks up languages as quickly as she does musical instruments.)

Most importantly, she appears totally unconcerned with conventional wisdom. I’m guessing that MMMystery on the Friendship Express would be taken as the best evidence that Pinkie’s not too bright, but here’s the thing (and I cannot overstress this enough): genius is always insane until it’s proven correct. Genius is not listening to whatever books and Princess Celestia tell you. Genius doesn’t report to you what every page of Wikipedia says; genius challenges what every page of Wikipedia says. Pinkie’s ideas in MMMystery may be pretty ludicrous, but even our reality here on Earth has a natural tendency toward the ludicrous. She may well be more on the right track than any of us.

(plus some other integral non-pony characters; comes courtesy of this but I had to add in a few names manually)

There are some others, but none of them matter enough to me to mention.

B+ Tier
♫ We’re the toughest My Little Pony in town! ♫

24 Luna Eclipsed
25 The Best Night Ever
26 Princess Twilight Sparkle
27 Keep Calm and Flutter On
28 The Super Speedy Cider Squeezy 6000
29 Secret of My Excess
30 May the Best Pet Win!
31 Castle Mane-ia (first-place Josh Haber)
32 Rarity Takes Manehattan
33 MMMystery on the Friendship Express
34 Applebuck Season
35 Swarm of the Century (used to be top 10 material for me and I still love it as much as I always have, so it shows how many episodes I really, really love)
36 Sonic Rainboom
37 The Last Roundup
38 Ponyville Confidential
39 Magic Duel
40 Green Isn’t Your Color