Here in the modern world, we’ve resolved many important questions and have a greater understanding of reality than ever, but for some reason the most basic foundations of human comprehension continue to trip people up. I’m talking about two of the classical laws of logic:

If that seems too algebraic, then be glad I didn’t write them out in symbolic logic. =P But seriously, consider it this way: 7 = 7 and a flower can either be a rose or a non-rose, but it can’t be a rose and a non-rose at the same time in the same place.

This might sound so obvious that anyone would wonder why I’d bother discussing it, yet a week can’t pass when I won’t hear someone make a claim or ask a question that shows they don’t understand at least one of these laws of logic. In fact, just such a line made it into the climax of a certain blockbuster-budget movie. 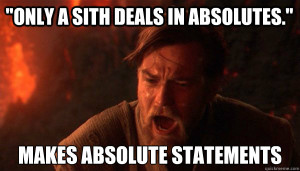 Let’s consider some other lines.

“By failing to plan, you’re planning to fail.”

Why do people use this line, then? By coincidence, failing to plan sometimes has the same results as planning to fail. So this saying can accurately predict results, making it useful for hinting at the consequence of inaction, but it’s still true that effect doesn’t define cause.

“All truth is relative.”

A truth claim is a truth claim. A = A. That means “All truth is relative” is relative if it’s true, so it undermines itself. As one of my fellow students said in an ethics class, “If you’re a relativist, you shouldn’t be.” You’d have to admit no objective justification for your own position.

(The similar claim “there is no truth” is even worse off.)

This idea is similar to but more subtle than the “planning to fail” idea. Both call the results of two actions equivalent, but this idea goes further, claiming there’s no such thing as a non-decision to begin with. Wrong! I can demonstrate how:

As I develop Dreamblazers, how should I tweak the abilities of my Dryad enemy?

“I don’t know” is a legitimate answer and an example of non-decision.

By the way, this sort of thinking can also quickly turn into a pragmatically self-defeating claim. Let’s say we’re voting on Mighty No. 9 character designs for Call. 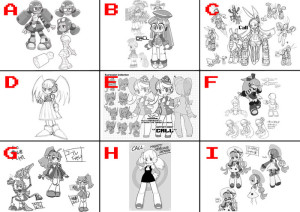 A fan named Julie has voted for E while her friend Chrissy is torn between E, F, and I. Julie tells her that F is probably going to win, so if she doesn’t choose a favorite then she’s basically casting a vote for F. Julie then urges Chrissy to place her vote and says that no matter who she chooses, it’s everyone’s duty to pick her favorite.

Do you see the problem? If Julie truly believes that not picking a design is the same as picking design F, then why should she be urging Chrissy to choose? After all, even if Chrissy doesn’t choose, she’s still chosen according to Julie!

I’ll say much more about pragmatically self-defeating beliefs (as opposed to logically self-defeating beliefs) at another time. Also at another time, I’ll address the rather silly claims that “We are all atheists” or “God doesn’t believe in atheists.” They’d fit into this post thematically, but I don’t intend to write overly long entries. Besides, each claim comes with a number of implicit premises—a subject well worth its own post, possibly on the principle of charity.

For now, what’s my epistemological conclusion? We can trust—or at very least are forced to assume—the basic foundations that language requires. The fact that we can communicate at all suggests that even if our first principles can be wrong and our logic may not be perfectly developed, our thinking isn’t broken beyond repair. We can learn.