In a blog where I “rarely conclude,” as the tagline says, my early posts will be among the few times when I do. Let’s talk epistemology, the fundamental theory of knowledge. What can we know for sure and what are we justified in assuming? 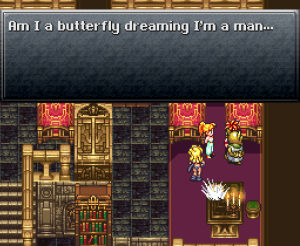 If not earlier in my life, then I was probably doomed to be a philosopher at the age of 10 or 11 once Doreen spouted these lines in a game as excellent as Chrono Trigger and with music as excellent as Corridors of Time playing.

What if everything is an illusion? This is the school of thought known as solipsism and a person will likely run across the idea sooner or later. The person whose first encounter with solipsism is to hear it in Chrono Trigger, see it in The Matrix, get the gist of it from Star Wars: The Empire Strikes Back (“luminous beings are we, not this crude matter”), or read up on near-death experiences might not be equipped to respond, so she can find it a fascinating question, as I did. If she first hears it while studying René Descartes in a philosophy course, though, she’ll probably be familiar with the answer:

We can’t “know” that external reality isn’t an illusion, but we’re justified if we make the basic assumption that it’s real.

Why? Consider the alternative: say I assume there’s no universe outside of myself. With that assumption in place, there would be no purpose to asking questions. I can’t know anything because there’s nothing to know about. There’s no morality, no history, no logic, no science, no language, no mathematics—for the solipsists, all of these are only the products of one’s own imagination. “Cogito ergo sum,” they may say (“I think, therefore I am”), and even ergo sum isn’t guaranteed, but aside from that they must believe they know nothing.

And now consider the corollary: do you believe that some actions are truly right or wrong? That historians and archaeologists provide knowledge? That logic conveys some truths? That engineers invent and scientists discover? That language has meaning? That mathematicians can help us understand the universe? If you believe even one of these things—if you believe even one physical or metaphysical truth claim about entities outside of yourself—then solipsism must be false. (Yes, even metaphysical truth claims! For example, an action can’t be morally right or wrong if there’s no such thing as actions, which the solipsist must believe!)

So while “Am I a butterfly dreaming I’m a man?” will always be a fun question, we shouldn’t act as if it’s true or even as if it’s plausible—at least not if we believe in ethics, the existence of the past, or any of the other realities that would necessitate the falsehood of solipsism.

My conclusion: Yes, the universe really exists. Now let’s move on, as wonderful as the music might have been, to more interesting epistemological questions. =P