In other news, it’s that time of year for a Pokémon release, which normally means I disappear into the ether for 1500 hours. Thankfully for my productivity, though, Hoenn is only my sixth favorite region and after 1500 hours of X/Y I only care about five or so Pokémon that I didn’t already have. =P

Which reminds me (and the above concludes the progress segment of today’s update):

On my Musings blog I’ll write mini-reviews of every game I’ve played this year, but here’s the short of it: this has been a very good year for me in gaming, but also a good year for reminding me why I’m crazy enough to make an RPG in the first place.

Let me first say this: I’m not doing it for money. =P I spend so little that if I partnered up with someone and bought a second house for all cash, I could collect rent for the rest of time and do nothing. And no doubt you’ve heard people say that’s their dream. “If I had [X] money then I’d never work again.”

But that’s not me. I’m making Dreamblazers partly because I can’t not and partly because nobody’s making the kinds of RPGs I want to play. Or in the case of 2014, even when they make something genius like Bravely Default and Pokémon, something else goes very wrong in the process.

Often when an indie game developer says nobody’s making games suited to them, I start running for the hills because they’re talking about a zany high concept game or random genre bending “just because we can” or something along those lines—things satirized by The Optimistic Indie.

“They said my game is imaginative, personal and meaningful, but unpolished. Well yeah. I’m trying to educate an audience, not attract one.” –April 25, 2014

“Making a roguelike where you are a fashion designer riding a motorcycle. It’s called voguebike. Seriously, where do I get my inspiration?!” – June 22, 2013

“Writing a game about a young woman’s decision to leave her husband for a soldier whose child is robbed of his talent. It’s a platformer.” –October 8, 2012

“I hope that one day I will make the ‘Citizen Kane‘ of games: Greyscale, old-fashioned, not really interactive, you collect lots of coins.” – April 14, 2012

Not what I’m talking about, though! There’s no grand overarching game element that I feel is missing from the industry. Not one. However, there are also no games that I feel do everything I want simultaneously. I’m talking about normal encounters with enemies who are threats but not insta-kills, a hybrid of open-world exploration and linear progression, an equipment system with real decision-making instead of rote upgrade, super frequent boss battles of multiple-weak-enemy and single-strong-enemy and one-one-one-duel variants, no consumable items, highly useful status effects, and other gameplay elements brought together in one place.

And now I can get back to tinkering with that instead of handling “basic” 2D movement, so that’s pretty exciting! :D

Not shown, though, is another hidden element of balance: distribution. Flame Spray is all around superior to Fire Wall, but the latter can be used by almost any mage with a fire affinity while Flame Spray is reserved for wyverns, dragons, and other rare fire breathers.

…also, looking this over again, somehow I only now noticed how fundamentally flawed my Power For Tier column is. I’m leaving this picture in untouched, though, as simple evidence that I’m not perfect. =P

I finally pinned the damage formula to a comfortable level, then wound up creating more moves than expected! Similar to Pokémon, most enemies in Dreamblazers appear in multiple areas at different levels and share from a large pool of moves. For example, the Greatwolf and Feligas monsters share attacks such as Mega Slash and Vital Fang and recur on several continents because wolves and big cats are everywhere. (No, there won’t be any Zubat or Tentacool appearing all the time.)

This type of setup means that move creation is very front-loaded. Since I didn’t have any archers until this point, suddenly five new moves appeared for the Elven Archer enemy—five moves that I won’t need to create again for any of the Ranger enemies! Likewise, the Dryad and Sylph Mage had twelve new moves created between them, but other magic-using enemies will share their attacks.

Again, Pokémon is a useful analogy. If I created moves in Pokédex order, then I’d get through 18 Pokémon with only one Electric-type move before suddenly several show up at the Rattata mark (#019) and even more for Pikachu (#025). However, by the time I hit Gengar or so (#094), I’m guessing that over 85% of moves would be created for only 13% of Pokémon. Not that I’m operating on such an enormous scale, of course, but the ratios are a great point of comparison.

All of this does entail lots of spreadsheet legwork to creating attacks before I can even touch Unity or ORK. I don’t mind, but progress feels more tangible in a playable demo than in rows and columns, even if it’s a playable demo loaded up on placeholder everythings.

* Sent art feedback for Jig (normal outfit round 1), Star (round 1), and Mina

* Add remaining enemies for the first two dungeons in terms of stats and AI (several enemies in these dungeons also appear on the overworld, so they won’t need to be added), including the two bosses
* Test a range of player party attacks against various early-game enemy groups and vice versa

One downside of weekly updates is that it might make me look erratic at times. We’ve extended art deadlines for reasons that it wouldn’t be right for me to disclose, so character designs will return to the backseat for a little while and I can get back to balancing the stats of friends and foes!

Taking a break from battles has cleared my head a bit, which was very needed. Right now I’m adapting a similar HP scale to Pokémon and Dragon Quest, but the balance has felt off to me compared to either game. I was just getting stuck on that point when the big news hit, but a little distance has given me some perspective and ideas, so it’s time to run through all of them.

* Sent art feedback for Kelly (final), Lash (round 3 and final), Faray (happy accident final), Jig (alternate outfit: round 3, final, minor revisions), Princess Leaf (final, minor revisions), Telia (round 4 and final), Tango (round 2), Minori (round 1)
* Sent art requirements and references for Eris, Star, and Mina (also coincidentally a model for the Imperial Uniform)
* Wrote but have not yet sent art feedback for Winter (round 1) and Eris (round 1) 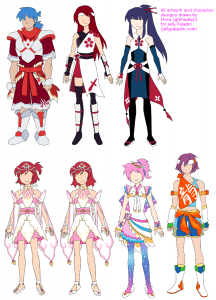 Whoops! It’s a few hours past Monday here and I forgot about my weekly devlog. With the one precious transition month we have, my days and nights have blurred together into intense 12-14-hour sessions, so I lost track of time.

As seen above, though, it did pay off! We’re moving along like nobody’s business with six new finished designs. We had a total of thirteen before this past week, so that’s almost a 50% increase—and Eris’ first round was so solid that she’s almost completely done as well. Not only that, but we accidentally stumbled onto a near-finished Misty design during Winter’s process. Even if Flora doesn’t have time to go through with her (Misty), I’m still further ahead with her than I would have been otherwise.

Needless to say, I’m incredibly grateful for this bursting, hectic period of character design. My sleep may be troubled, but my soul is satisfied.

The remaining goals of this month are finishing Tango, Winter, Jig, Minori, Eris, Mina, and Star, then drawing the title screen image if we can fit it in. Because she’s my first artist, I’m giving Flora dibs on the first picture that every player will see.

Even though we technically finished six designs in the last week, all of them were deep into the creation process; out of these other seven, only Tango and Eris are well along. Still, I believe we can do it. Ideally I’d like to cram in one other character, but that’s just my idle hope—it might be unrealistic and I won’t be selfish with Flora’s time.

Only 23 more days of art await.

It’s amazing how much more productive I get when I’m doing what I really care about: putting down all the groundwork to start watching numbers fly around in battles.

…or so I say, but honestly, the impressiveness of the above list compared to some of my previous weeks is mostly an illusion. It took ages to get my basic menu layout right too, but “made a menu layout” will never sound as cool as “made 35 attacks and 20 enemies” even if it took longer. Still, illusion or not, it feels so much better making gameplay than UI layouts. =)

More of the Miharu enemies’ moves are in place now than not. Once they’re all set up, the enemies just have to learn their moves, use them in balanced and appropriate patterns, and join forces to start battling my test party. Excitement ahead!