Character design for Tango Moonlight! As a bard, he’s a good support mage and a “narrator” who’s present within the story.

With their mastery over basic transcendent-speed techniques, kobold rogues can exceed light speed in small bursts. By taking advantage of the surrounding territory of their preferred environments, heavy forests and caves, a single rogue uses tricky movements to intimidate aggressors by appearing as multiple kobolds lurking in the shadows. However, like all other kobolds, their bark is worse than their bite. If forced into direct combat, they’ll back off quickly from experienced warriors.

“Which came first: the dryad or the tree?” This famous riddle hints at the popular assumption that every tree has a guardian dryad; hurricanes, earthquakes, and tidal waves may devastate the hardest of rocks, but a fallen tree has almost never been observed. Dryads themselves are rarely observed even inside forests, but usually the appearance of one of these female forest spirits signals a disturbance in the natural order. With her excellent magical talents, a dryad quickly corrects problems—and sometimes that problem is the traveler who sees her.

With the impending release of Super Smash Bros. 4 on Thursday night (Pacific time advantage!), I thought it would be nice to get something rolling that will be productive even when I’m not: time to start paying for pixel art!

…but gathering references for that makes gathering character design references look like a breeze. =P For one thing, character art is always widely available because it’s used as promotional material, but tile sets or at least area maps have to be ripped by someone who cares about the game.

For another thing, now I see why RPGs are often loaded up with generic locations like “ice cave” and “port town.” I’m specifically aiming to avoid that because I want memorable areas, but that also means the things I want to create either haven’t been done or haven’t been done in numerous popular games that I can cite for references. For example, in my Spring Lake Valley, I want a forest area where the land rises up like a hill and then curves downward to form an elevated “bowl” that contains a lake. Here’s a crude diagram: 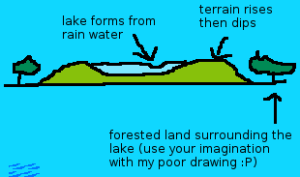 I’ve never seen this in an RPG; usually the water level is below the ground level, not above. I don’t even see this in photographs of Earth (which is what I had to resort to for my Seaside Slime Cove)—the closest thing would be some of the lakes inside volcanoes, but that’s steep rocky terrain and I’m going for a curvy grassland.

One way or another, though, I’ll figure out how to convey info on what I need art-wise. Interesting locations or bust!

(…except for the Den of Kobolds. That’s just a heavy forest—it’ll be memorable, but not because of the environment. Consider that a teaser. =) ) 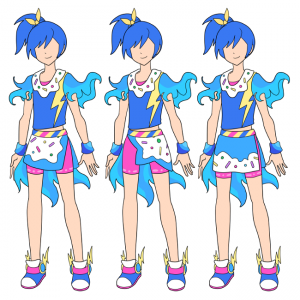 * Sent character feedback for Star (three outfits), Mina (two outfits), Misty (final), and Minori (round 3)
* Got a bead on what new things I can do in the four version updates of ORK that have been released since the last time I wasn’t working on 2D

Getting back in the zone, wrapping up art, and the transition to 2D.

* Star, a mysterious girl whose powers and clothes change when she comes into contact with different weapons!

* Mina, an undercover Imperial agent! Her size-changing range exceeds nearly any other sylph, making her an ideal spy.

* Another version of the standard Imperial uniform. Mina wears the variant used by light fighters like martial artists, archers, clerics, and mages, and other light fighters while this other model wears the variant used by heavier fighters like warriors, paladins, and champions. The male uniform lacks a skirt but is otherwise identical. Although Sakura and Evelyn were also designed in their civilian clothing, they’re members of the Imperial ranks too and will be seen in Mina’s version of the uniform.

* Misty Yu, an ageless water spirit. She has control over vapor, ice, clouds, and all other forms of water, so don’t expect to simply freeze her or evaporate her!

* Send (final?) character design feedback for Tango (and Minori if she comes in)
* Rework all fashion effects that can be improved with the new ORK setup
* Update the status menu’s equipment display
* Update at least three enemies’ AI to take advantage of new features
* Write bestiary flavor text for at least five enemies
* Figure out how to use 2D Toolkit (and other Unity assets if needed) to get basic top-down map movement functional

A mixed blessing and curse of making my own hours is that I could easily put in 10-12-hour days when I was in the zone, like while making enemy AI or balancing attacks, and that I can easily put in 3-4-hour days when I’m not, like right now when I’m just trying to figure out what in the world I’m doing with 2D by going back to Unity fundamentals that I originally glossed over.

I remember the intense nights when I was first making the fashion system, a project of its own that took several weeks, including redoing the stats setup, tracking down my input errors, and increasing the original number of fashion effects by about 50%. Though tedious, I couldn’t stop plowing forward because I did know what I was doing and what the end result should look like.

On the other hand, going through a struggle to understand Unity, following it up with a week off to plan for a trip, and then following that up with the trip itself has completely thrown off my flow and now I’m procrastinating and sinking time into the Super Smash Bros. 3DS demo.

I need to get back into the zone and thankfully I might know how. In the updated ORK, I can add enemy bestiary entries and improve my status menus, enemy AI, and fashion system. These have been some of my favorite things to do in the past (flavor text in the case of the bestiary entries), so back to them all I go. =) 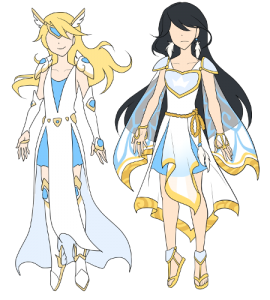 Eris Kenos on the right and a mystery character on the left. The mystery character actually won’t appear until the third game—if I get that far!—but since we stumbled onto her design, I decided to just go with her. =)

* Send character design feedback for all pending characters (Mina, Minori, Misty, Star, Tango)
* Figure out how to use 2D Toolkit (and other Unity assets if needed) to get basic top-down map movement functional

Normally Hawaii is warm, humid, and rainy, but the recent hurricane seems to have disrupted the local weather—instead it was hot, humid, and sunny. Heat and sweat aren’t a great combination for productivity!

I’m mostly recovered and rejuvenated from the trip now, although I’m still adjusting to the time zone shift, so I’ll be getting cracking again. =) The character designs are first priorities since these should be the final ones with Flora and I fully expect to get them all—Mina, Misty, and Star are all especially close to being finished.

And then it’s back to understanding Unity. I’ve essentially taken two weeks off because of my trip, preparation for my trip, and cooldown after my trip, so hopefully I can transition smoothly back into the swing of it. x_x