This week I can mostly let the artwork speak for itself… but only mostly! 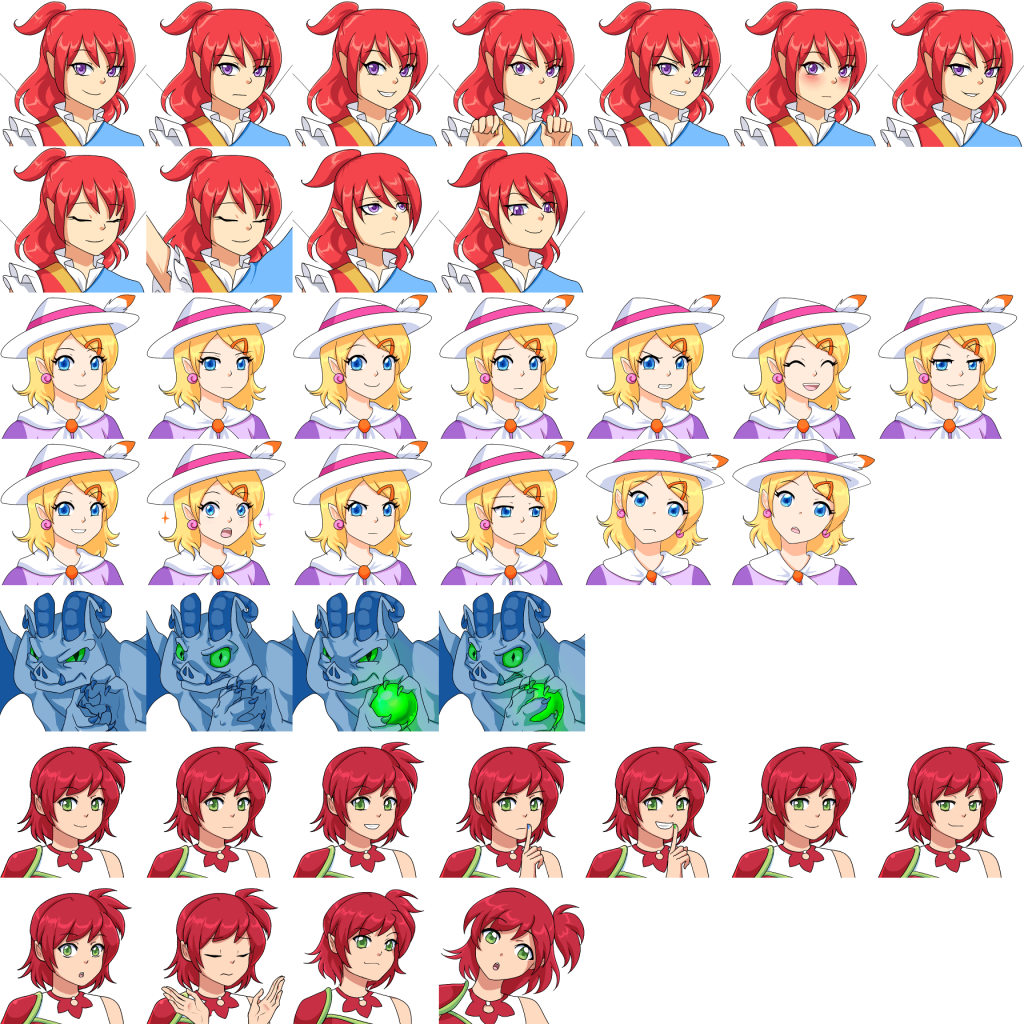 Shown here are Ardis, Astrid, Besarre, and Leaf and there’s all sorts of stuff to mention related to this collage:

* As seen in games like Fire Emblem 9 and 10, Bravely Default, and Tales of Graces, having the faces at an angle means that I can flip them horizontally to have characters talking back and forth on different sides of the screen. Of course, doing that would result in some clothes being on the wrong sides and such, but those games didn’t worry about it and they’re made by companies with much bigger budgets than me, so I’m cool with it. =P

* Starting tomorrow, I’ll tweet at least one face each week plus a line of dialogue that goes with it. And I’ll call it Talky Time Tuesday! :D Since this site is a more comprehensive collection of Dreamblazers-related material than Twitter, I’ll also add a new Dialogue page here that will embed all those tweets.

* A small Easter egg here is Leaf’s nail polish. Leaf’s a pretty mysterious girl; her magical-musical skirt plays tunes according to her will, but her nail polish made from a liquid rainbow changed colors randomly until she experimented with chemical catalysts to control it. Blue and green are her usual colors!

* While this is the full collection of expressions made so far, the number of expressions per character is subject to go up; for example, I might see a face for a later character and then realize that Leaf should have the same kind of face and doesn’t. Right now Besarre is the most likely to get one or two extra expressions.

* Random trivia time about Ardis! When I was my younger 2000-2001 self who first dreamed of creating my own game, Ardis was a name that I picked out and thought I was making up—just like I’d made up Celty as my even younger 1997 self who was toying around with Blades of Exile. As it turns out, Ardis is an Irish name for girls, which completely changed her character. Her description from my early files says that she was a half-elf with tanned skin who wore a halter, miniskirt, and sandals, so I’m guessing that I conceived her as more of a harem dancer type of character. Although it is just a guess, I did love Dragon Quest IV (localized back then as Dragon Warrior IV), so maybe I thought of Ardis as a girl more clothed than fellow dancer Mara but less clothed than her sister Nara: 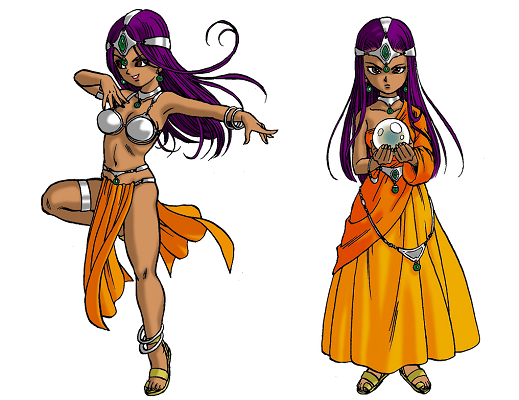 Possibly my inspiration for the original Ardis?

We did try darker skin for her during the design process, but my knowing that her name was Irish led me to stick with lighter skin. And while Ardis is technically still a half-elf, she’s now also a half-sylph, fitting in with Irish lore. She was one of my least developed characters back then, basically a glorified set of stats who filled a party slot and faded out of existence at the end of the game (because for some reason all the great RPGs on the SNES had people fading out of existence at the end of the game), but the modern personality I’ve come up with for her has made her one of my top five favorites to write for now.

* Random trivia time about Besarre! Like Ardis, I thought I was making up a name in 2000-2001, but it wasn’t Besarre at the time; he was named Bestiary and wouldn’t you know that’s a real word. He was also underdeveloped just like Ardis and even more than her, but his importance jumped massively in 2012 when I was penciling out the rough progression of the plot and figuring out how to tie different story elements together.

* Random trivia time about Leaf! Yet another tale of 2000-2001: Leaf was the name of a talking orange cat who was one of the 17 main characters instead of a girl who happens to carry a kittyara with her. But fear not! The talking cat is still in the story with a different name, color, and gender—and she’s coming soon!

More faces will be posted here as progress continues. =) And the trivia will roll in with them!