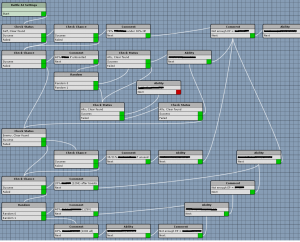 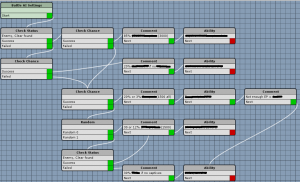 I achieved everything I expected to this past week and a bit more; instead of only covering 25% of overworld enemy AI, I did all of it, which is great. I owe a lot to ORK Framework for making battle AI sensible to a designer. =) Just need minor polish for the early party, then it’s time to begin testing!

Even Year 1999 Me (or so) understood in some primitive sense the value of challenge and battle AI, but today I’d say I was a bit heavy on the challenge at the expense of the AI.

For example, in a document that looks like it’s from 1999 or 2000, I have a paragraph about a battle with a single powerful boss, two archers who use a lock-on ability and then get guaranteed criticals on their target for the rest of the battle, two mages who boost enemy party stats twice each per turn, and a warrior who can attack twice per turn. The idea was that since the main boss has too much health to take it down first, the player has to chip away at the weaker foes like the mages and the archers while the main boss runs wild.

I can tell exactly which games my younger self borrowed most ideas from, but this particular battle seems incredibly forward-thinking. It’s a lot like a Bravely Default or Etrian Odyssey boss fight, but BD and EO didn’t exist at that time and I can’t name any RPGs of that era that could have modeled a battle of that complexity for me. If anything, I probably ported player party dynamics over to enemies.

However intricate it might be, though, I believe the battle is flawed: just like certain EO bosses who use their ultimate attack every fifth turn, it’s too consistent. Five of the six enemy party members do only one thing and four of those six only do that one thing to one specific character; the archers pick a target and stick with it while the mages will only target unboosted allies.

With no random chances modifying the sequence of events, winning the battle boils down to identifying a pattern and then going through the motions. For all its moving parts and hard-hitting enemies, it’s not especially more exciting than Final Fantasy VI‘s Whelk, the tutorial boss. Remember not to attack when it’s in its shell. Remember to target the mages and archers first.

To my credit, at the time Star Ocean: The Second Story was my newest Top 5 Game and the idea would fit much better in real-time action battles, which emphasize player execution instead of player comprehension. Any turn-based PvE (Player vs. Environment) battle system, however—even halfway real-time Final Fantasy or Chrono Trigger ATB systems—requires a degree of randomness to feel dynamic.

This boss fight will still exist in a new form, but winning won’t be as simple as figuring out the “trick.” The enemies might use the pattern above or they might do something different. Status effects will come into play. Critical hits will be likely instead of guaranteed, but they won’t be limited to one singled-out target. The enemy side will have healing. Compared to the original full aggro DPS idea, the battle will probably be less challenging, but definitely more unpredictable and engaging.

For me that comes a little later, though. I’ve got an overworld and normal encounters to take care of before I get to dungeons and boss battles!