So, uh, I recently got hit with a surprise $1500 house-related bill out of nowhere and there’s another $700 still pending that may or may not need to be paid. It was almost even worse than this to the tune of $780, but that one was resolved quickly enough to go without incident.

This wouldn’t be all that bad except that I also have significant travel expenses coming up for a major event in a relative’s life happening in late December (one of the worst times for travel expenses). There’s a certain level of savings that I’m not willing to dip below if I can help it, so this represents a setback of about three weeks if not more. In other words, I’ll need to put in some extra hours at my day job for the next little while instead of plugging away at Dreamblazers.

So I’ll call this post finished. Probably no more updates for a while, but we’ll reconvene on October 5th, the day before my birthday. =)

No no, I’m just kidding. :P Not about the money situation and how it affects me, but kidding about how it affects you, my dear readers. You shouldn’t notice a difference since I still get to update by posting the stuff produced by the rest of the team! Like… these!

Double duty from Liz this past week turning out the Diamond Meteor and the Greatwolf. One of these sprites will only be seen once while the other is found all over the world! Take a guess which is which. :P

The Diamond Meteor is the tutorial “enemy” and exists for multiple purposes, not the least of which is immediately establishing the flavor and setting of the world of Dreamblazers. Why would anyone “fight” such a thing? Well, to cut it up with swords and beams and turn it into matching friendship anklets, of course! Can Leaf manage to pull that off before it hits the ground? Find out in the next exciting—er, actually, the first exciting episode of Dreamblazers! (When it’s ready.)

As for the Greatwolf, it’s a fairly early creature that’s quite a bit stronger than it looks. With solid stats all around, a strong set of interesting moves, pretty intelligent AI befitting a wolf, and the ability to call more of its pack, this isn’t a monster to be underestimated. However, they might not all be wild and feral beasts. There’s a popular contemporary legend about an elven ranger who wanders the wilderness with a Greatwolf companion…

Oh, and that’s not all I’ve got to share! 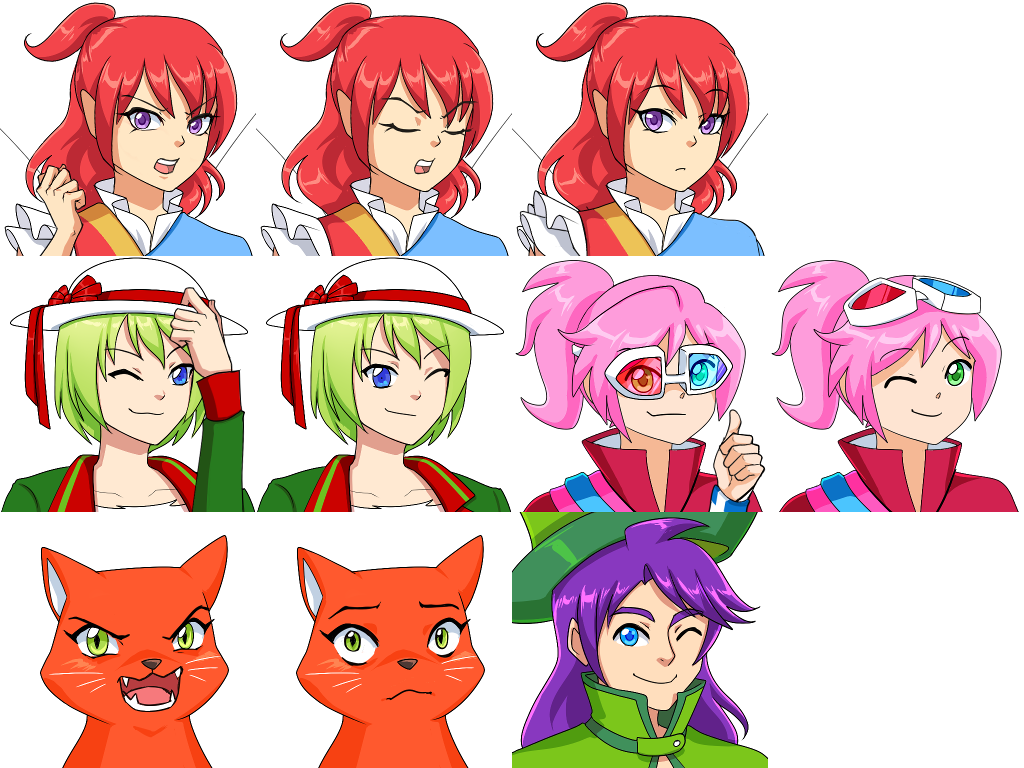 Yes, it’s the return of Flora. =) These portraits join some already previously-established collages like this one, this one, and this one. They were mostly inspired by some of Alex’s pixel art and translating that into portraits, but I also wanted a couple more expressions for the very expressive Ardis and felt that I needed a thumbs up for someone because somehow zero characters had one before. Celty’s hat-adjusting hand and Jig’s thumbs up can be used with any of their respective portraits for flexibility, much like Sakura’s prior hand gestures.

Speaking of Sakura, there are a couple more portraits on their way and/or already here that include her, but I’ll save them for another big burst of update. :D

As you might have realized by how many portrait collages I just had to link (and I wouldn’t even be surprised if I missed a few!), by now it would be really unwieldy for a newcomer here to go through dozens of past posts and see all the wonderful art assets that Flora, Becca, Alex, and Liz have created. So, as I find time, I’m going to make a page that collects all the art into one centralized location. The navigation bar’s already pretty occupied, but I’ll get rid of the dead weight (and outdated) Contact page and put that info on the Team page to free up room.

Even the Characters page might disappear to be merged in with the new page; it’s kind of outlived its teaser usefulness for several characters now that I have assets to show that will actually be in the game, but it can’t go away entirely since it does feature full-body shots (minus eyes) and several characters who don’t have their portraits yet and won’t until a while down the road.

Anyway, look forward to that! Even if you’re a long-time reader and have technically seen everything before, it’s going to look very impressive to have everything collected in one spot. :D

One thought on “Dreamblazers Update: Week of September 14, 2015 (Yikes Edition)”